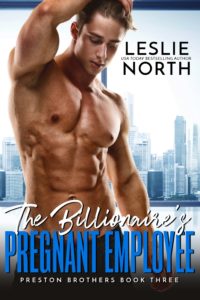 For as long as she can remember, Claire Baldwin has dreamed of seeing the world. For a small-town girl it might seem impossible, but she’s already seen more of the world than she ever expected, and her skills as an interpreter promise more adventures to come. When sexy billionaire Archer Preston needs someone to interpret businessmen from China, Claire’s skills are more than up to the task. Not only can she understand and speak their dialect, she’s also pretty good at interpreting Archer’s obvious attraction. When he suggests a no-strings affair, Claire accepts, knowing that Archer would never want anything more. But all her dreams come to a screeching halt when she finds out she’s pregnant—with twins. Thankfully, she and Archer still agree that love and marriage are definitely not in the picture. After spending more time with Archer, though, Claire begins to realize she might want that picture to include a family portrait.

Archer may not be entirely thrilled to know he’s going to be a father, but he’s committed to being in his children’s lives. Though the thought of settling down makes him more than a little queasy, he’ll take care of Claire, give her a place to stay at his house, and make sure his babies are healthy. Just so long as his relationship with Claire is strictly platonic. Which it is…for about a week. Seems they just can’t fight the searing attraction between them. Before Archer knows it, he’s fighting more than just a simple attraction to Claire. He doesn’t love her, does he? Just the thought of spending the rest of his life with one woman sends him running halfway around the world, and Claire can’t follow. If Archer doesn’t realize what’s really in his heart, he just might lose the only woman he’s ever truly loved…

The Billionaire’s Pregnant Employee is available from: