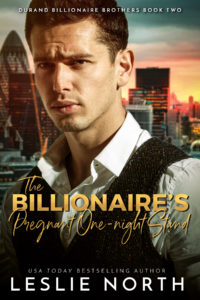 It was just one night of passion. But it led to something more…

When a barroom brawl leads to an ultimatum from his grandfather, handsome billionaire Bastien Durand finds himself neck deep in shampoo and hair color. To prove he’s not the total screw-up his family thinks he is, Bastien agrees to mentor a salon owner whose business is struggling.

But when he goes to meet the owner, he realizes he’s already met—and slept with—the very beautiful, and very pregnant Elise Davies. Elise contacted his grandfather to find Bastien. And now the young billionaire doesn’t know what’s more terrifying: being a father, or falling in love…

When a pipe breaks in Elise’s salon, where she’s also been living, Bastien convinces her to move in with him—temporarily. Elise agrees, and despite her better judgement, it isn’t long before she’s having steamy dreams of rekindling her passion with her former fling. But Bastien is a bad boy billionaire… Not exactly the kind of guy who falls in love with a hair stylist.

Bastion wants to prove himself, and do the right thing for their child. But will that be enough for Elise… or does her heart demand more?