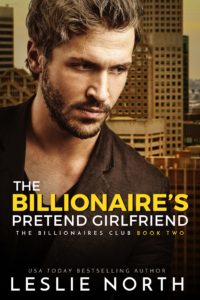 He’ll risk everything to win a bet.

Winning isn’t everything, it’s the only thing for billionaire Daniel Trent. His fearless determination in business makes him successful in almost all areas of his life – except love. But who has time for that anyway?

So when Daniel arrives home early from a work trip to find his house sitter, Jackie Stone, naked in his bathtub, he is more than a little surprised. Aside from their flirty notes around the house he’s never actually met her before. And it turns out she’s really, really cute.

But then Daniel’s best friend Grayson wrongly assumes Jackie is his girlfriend and, knowing that Daniel has only ever had flings with woman, Grayson makes him an irresistible bet: maintain a relationship with Jackie throughout his wedding celebrations and prove his reputation as a playboy bachelor is wrong.

After promising to pay for her final year of graduate school if he wins the bet, Jackie agrees to play the role of Daniel’s fake girlfriend. But she knows they’ll have to practice acting like a couple if they’re to be believed, which leads to much more than just a kiss…

The last thing Jackie wants is for this business arrangement to get complicated. Falling for Daniel would be a colossal mistake. A mistake her heart, unfortunately, seems more than willing to make.

The Billionaire’s Pretend Girlfriend is available from:

The Billionaires Club is also available as a boxset from Amazon, GooglePlay, iBooks, Kobo and Nook.