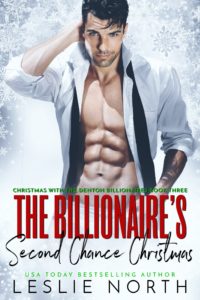 Billionaire celebrity chef Christopher Denton is back in his hometown, hoping to win a local baking contest and gain some much-needed publicity before launching his new show. The only possible glitch in the plan is knowing Mara Lancaster, the girl who broke his heart back in high school, is his competition. Though his pulse is racing in that old familiar way, he plays it cool, not wanting Mara to know how much seeing her has affected him. Maybe if he acts like he doesn’t care, his traitorous heart will listen. But as the competition heats up, so do his thoughts about her. Mara’s even more gorgeous now and he’s finding it difficult to keep his eyes—and his hands—off her.

Mara has to win the Christmas gingerbread house competition. This isn’t a game to her: it’s her entire future, because she needs the prize money to start her own bakery. Nothing will get in the way of that dream. Certainly not an egotistical, bad boy billionaire chef, even if he makes her blood sizzle and her mind turn to cookie batter—just like he did when they were teenagers. She can’t deny their attraction, though, and the more time they spend together, the more Mara sees the boy she loved before accidentally breaking his heart. And she likes what she sees. Chris is kind and really a bit of a softy, despite his hard exterior.

But just when Mara thinks things between her and Chris might end sweetly, her ex shows up on the scene and leaves Mara wondering if it will all crumble—just like a gingerbread house…

The Billionaire’s Second Chance Christmas is available from: