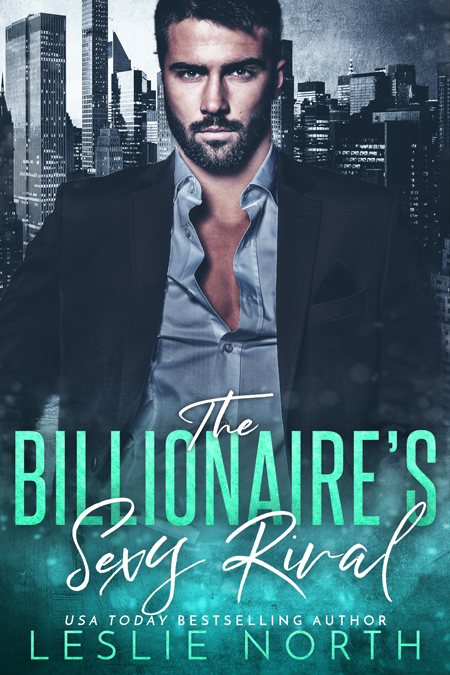 A chest I want to bury myself in – yes!

William Jameson, a man truly after my own heart!

This silver frosted fox you won’t want to miss!

Find out what this alpha does in your copy of The Billionaire’s Sexy Rival.

William Jameson is a born leader. Strong, efficient, and with a special talent for knowing exactly what turns people on—it’s no surprise that he’s the CEO of the billion-dollar Jameson Ad Agency. He’s always had his choice of client—that is until a boutique agency called Wildflower sprouts up like a weed in his perfectly manicured world, stealing the last three jobs out from under him. It’s hard not to be attracted to the free-spirited owner. Her mind and body are exactly what his heart wants…it’s too bad his goal is to crush her as competition.

Poppy Hanniford, CEO of the Wildflower Agency, has always been unique and as colorful as her business’s name. A fan of communal collaboration and out of the box ideas, Poppy and William come together in the perfect storm when a rogue romance publisher decides that two is sometimes better than one: challenging Poppy and William to work together on a trial project. The person who performs best, wins their future business.

Forced by the client into teaming up, William and Poppy are about to find that while their leadership styles don’t mix, romance is one subject they agree on. A smoldering kiss for the cover of a book kicks off an affair that’s hotter than the bestsellers they want to advertise. When it’s made clear that only one of them can walk away with the contract, they’ll need to decide what’s more important: the job or their love.

William held his hand out to her. Poppy didn’t allow herself a split second’s hesitation. She grasped it, knowing full well what was coming.

The pressure of his handshake was instantaneous: his grip was powerful, his fingers and palm contracting together to dwarf her. Poppy had never been so aware of the petite size of her own hands than she was in that moment. Still, it was a power play she was all too familiar with, and she wasn’t about to back down just because William might be physically stronger than she was. She tightened her fingers and clutched him back with all her might. She saw one of William’s dimples leap approvingly into prominence.

“Congratulations on winning the first round, Mr. Jameson,” she said.

He crooked a dark, perfectly-maintained eyebrow at her. “I beg your pardon?”

“You didn’t think you’d won the war, did you? Just because I promoted your design over my own?” Poppy let the smile bloom across her face slowly, drawing her painted lips back over what she knew to be a set of immaculate, pristine white teeth. She wanted to dazzle him as much as she suddenly wanted to demolish him. William may wind up coming out on top when all was said and done, but that didn’t mean she couldn’t it give it all she had. She would fight fairly for this contract, but she would fight.

“I wasn’t aware that we were at war, Miss Hanniford,” William remarked. “And if we are, I certainly don’t expect my enemy to concede to me as easily as you did today. It shows a lack of strong leadership, to the employees that depend on you for a paycheck…and to me.”

The hand that held hers tightened. Their arms no longer moved in the up and down rhythm that made a handshake. Poppy gazed unflinchingly into William’s deep, dark eyes.

“I concede when I know I am beaten,” she replied icily. “And I’m not often beaten. I would think you and your agency know that better than anyone, Mr. Jameson.” She extracted her hand from his; at the last instant, when she thought he wouldn’t let her go, he allowed her to slip free. Her skin tingled with the memory of his grip. Poppy hoped it wasn’t a sign of nerve damage.

She hoped the tingling didn’t signal something else, either.

Get your copy of The Billionaire’s Sexy Rival today.