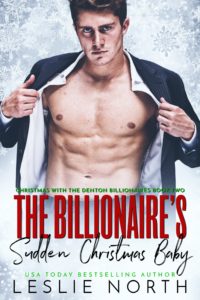 The Denton Hotels Christmas gala has always been a big deal, but this Christmas must be the most extravagant ever. Billionaire Mitch Denton’s CEO father is set to make a major announcement at this year’s gala, and Mitch hopes it’s what he’s been waiting for: his promotion to head of the company. Mitch is more than a little surprised when Jules Cardwell, assistant to the now-AWOL event planner, walks into his office, ready to oversee the gala’s planning. With so much on the line, he doesn’t need the distraction of a beautiful woman like her. When they find a real baby in the manger just as a major snowstorm rolls in, the two have little choice but to rely on each other. In Mitch’s luxury penthouse.

Jules tells herself she’s staying for the good of baby Noelle. It’s not because Mitch is gorgeous, rich, charming, and everything Jules has tried to avoid in a man. It’s difficult for her to breathe whenever he’s near. Worse, he’s sweet and kind and makes her heart ache in a way that’s not at all welcome. With Christmas drawing closer, the two work frantically during the day to make the gala perfect, but the nights are completely different. They’re hot and swoon-worthy, and Jules never wants them to end.

But just as Jules thinks they might actually become a real family, she gets a cold splash of reality: this is just a holiday romance. She could never fit into Mitch’s world, and even the magic of Christmas can’t change that.

When Mitch is given everything he’s ever strived for professionally, he realizes the one thing he truly wants might soon be gone forever.

The Billionaire’s Sudden Christmas Baby is available from: