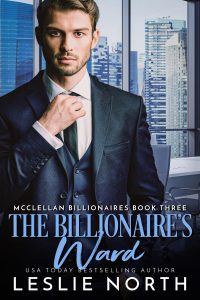 Vane McClellan is all business. He might come from money, but he’s worked hard to make his architecture firm one of the top in the country. But things have slammed to a halt in the wake of becoming guardian to Annabelle, his late cousin’s daughter. Vane fears Annabelle may need more than he can give her.

Maggie Stewart, Annabelle’s teacher, cares deeply for her students but likes to live footloose and fancy free. She’s about to move—again—but not before she gets Annabelle settled. They’ve grown close since the girl joined her class, and now Maggie has one final job: drop Annabelle off at Vane’s summer home.

When Maggie gets stranded at Vane’s vacation home, she gets a chance to see Vane vulnerable. The sight of a strong man doing his best in the face of new fatherhood melts her heart. When he asks her to stay and nanny Annabelle for the summer, Maggie agrees in hopes that she’ll be able to teach Vane how to be a father before her new job starts. Vane is happy to have someone he trusts to shepherd his young ward. As the three begin to become a family and Vane and Maggie give in to the passion that’s plagued them from day one, they’ll let themselves be something both have feared for a long time: happy. But when summer comes to an end, Vane and Maggie will have to decide if they want to follow their hearts…or their plans.

The Billionaire’s Ward is available on: