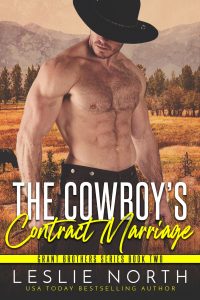 Jonah Grant wants to make his own mark on the world. As a horse breeder starting his business from scratch, he hasn’t had the easiest road. But he might have finally caught a break in the form of two beautiful studs for sale that would be perfect for his stock. The problem is Jonah doesn’t have the funds, or any means of getting them—until an old friend shows up with a proposition.

Virginia Leeland wants to build something of her own. The daughter of a traditional family, she refuses to stand behind a husband…she wants to stand on her own two feet. Still, she’ll take advantage of the money bequeathed to her by her grandmother and use it to buy Jonah’s beautiful old barn to host weddings in. The funds, however, are only available upon her marriage, so it’s a good thing she’s engaged.

But when Virginia catches her no-good, cheating fiancé, well, cheating on her, the marriage plans dry up, along with the funds for her business, and Jonah’s plans for expansion. The situation seems hopeless. That is, until Virginia has a champagne-fueled epiphany: she and Jonah can marry. In name only, of course.

But when their agreement becomes more than simply a marriage by name, their passion creates all types of entanglements: the enjoyable kind, as well as the more permanent sort. In the end, Virginia and Jonah will need to decide if they still only care about their business goals…or if the chance at love is what will really make their dreams come true.

Get The Cowboy’s Contract Marriage from: