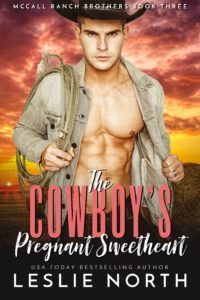 Karen Peterson has always known the rodeo was Carson McCall’s first and only love. She got proof of that when they were eighteen and he left her brokenhearted to join the rodeo circuit. She never got the chance to tell him she was pregnant—and never told him she lost the baby. Nine years later, he’s back home at the McCall Ranch nursing injuries from a bull-riding accident. When she sees him, she has a wonderful idea. Her sister’s autistic son, Devon, wants to learn to ride, and Carson is the perfect man to teach him. But Carson turns her down flat. Until the consequences of a barroom brawl require community service…teaching Devon to ride. Though Carson is the only cowboy she’ll ever love, she can shield her feelings for the sake of her nephew, even if Carson still makes her heart feel like it’s on a bucking bronco. So when she realizes she’s pregnant again, she’s terrified he’ll leave.

Carson is completely at odds. All he wants to do is heal and return to his life, despite his doctors telling him he’ll never ride at the same level again. He hates that he’s not the man he was, hates that everyone pities the washed-up has-been rodeo star. The only bright part of his day is the hour he spends with Devon—and Karen. Carson never forgot her, never really got over her. She’s still the girl he loved when he was just a kid, only she’s even more beautiful now. As they spend time together, it’s hard to resist their deep attraction, and in the end, they give in to it. Still, the lure of his first love—the rodeo—is strong, and when his doctor clears him to join the circuit, he’s happy—just not as happy as he’d thought he’d be. And when he learns Karen is pregnant, he’s torn even more. Could it be that the rodeo isn’t the only thing that matters anymore…?