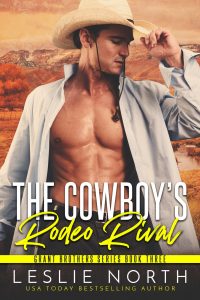 Nate Grant knows that his eldest brother has the respect, his middle brother has the smarts, and he was left to fight for his own piece of the spotlight. Thus, began his daring, dangerous, and often a little bit crazy foray into the world of rodeo. Now, with his career on the rise, Nate is back in town to do a promotional show at the local Strawberry Festival to land himself a major sponsor. But when he arrives expecting to be welcomed as the hometown hero, he instead finds himself challenged by the only person who could ever make him shake in his boots: Athena Moore.

Athena grew up on the wrong side of the tracks. Limited money for rodeo lessons or competitions meant that while she could best the boys, she couldn’t follow them to the big leagues. Watching Nate excel really lit a fire in her britches and after school she began training and teaching young girls rodeo skills. Winning against Nate at the upcoming Strawberry Festival will show the girls (and Athena) that they could do anything boys could—and do it better to boot.

But promoting the event means Nate and Athena are forced to spend time together. Too much time to keep their tumultuous feelings under wraps. Now, there’s a grudging respect to their relationship and a heavy dose of passion too. But as Nate and Athena get closer, their competition becomes public via a reality show. When the lines between promotion and passion are crossed, they’ll be forced to ask themselves what it is they’re fighting for…and what they’ll lose if they win.

Pick up this sexy ride from: