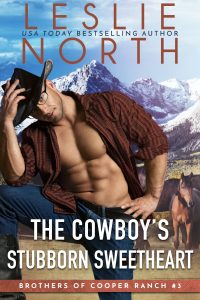 Julianna Norrell’s dream of leaving Montana for big city life in NYC was wonderful—until it all went bust. She’d tempted fate by getting a fine arts degree in photography, and believing one brilliant show would make her career take off. But three years later she’s a borderline starving artist, making a living off of stock art photography. Plus, she’s just been on the wrong side of a copyright infringement case and no gallery in New York will touch her. So when her mother seriously breaks her leg at the same time Julianna gives up her lease, it seems fate is pulling her back to where she started: Cooper Ranch.

Wright Cooper has come home to lick his wounds. After being a major fundraiser in a failed political run, most of America has started to hate his guts, and Wright himself is beginning to wonder when he’d stopped vetting his politician’s ideas and simply started funding them. Now, he’s home to dust off his boots and find himself again in the beautiful land that had made him want to enact change for his country in the first place.

When the two childhood sweethearts suddenly find themselves living under the same roof, they’ll need to decide if they’re coming home for good, or simply stopping over before losing each other once again.

Pick up your copy of The Cowboy’s Stubborn Sweetheart from: