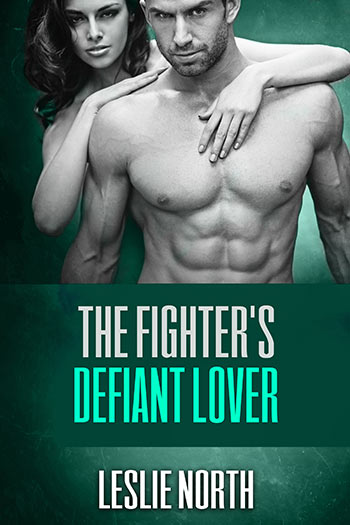 Vegas dancer Jasmine has never been shy about getting what she wants. And with her drug-dealing ex and his goon after her, what she wants is to have her ex out of the picture.

She’s looking for help from her friend Rachel and the hard-hitting Burton brothers, but it’s rising MMA star Dustin Caldwell who literally sweeps her off her feet. With a body to die for and looks that kill, Dustin presents a whole different kind of danger.Dustin has trained hard to make it this far, and he’s not going to let a mouthy showgirl distract him this close to his big fight. He needs to keep his focus in the ring, which isn’t easy when he and Jasmine start sharing the same roof. With her dark eyes and a body built for sin, he’s having a hard time resisting her pull. But with trouble on her heels, how far is he willing to go to keep her safe?

With the mess she’s in, Jasmine doesn’t think there can be a happy ending. It may be up to Dustin to prove that fairy tales can come true.

Download Dustin and Jasmine’s story from Amazon now and start reading it in seconds:

Jasmine gave a low, frustrated growl as she let herself into the garage. Neither Beck nor Rachel’s cars were here, meaning they must be spending the night at the hospital with little Chaz. She’d spoken with Rachel a little over an hour ago, and Rachel had said they’d probably take the nightshift. And Dustin was training. He did that a lot. A way lot. She let out a breath and headed inside.

She toed off her shoes and rolled her shoulders. Okay, so maybe it was a marvel that she was now calling this upscale neighborhood home. Beck and Rachel’s spare bedroom had more comforts of home than her home ever had.

She still needed to see about getting her clothes here, and the few things she wanted, and she had to find a dance class soon. She didn’t want to give that up. Dance had always been her salvation—her sanity.

She also needed to get her butt over to see Chaz. She hadn’t been to the hospital for three days. He’d been upset on her last visit when he couldn’t sit on her lap. Jasmine had started flying him like she was a pretend airplane when he was just barely old enough to sit up. He still loved and wanted to play that game—and germs didn’t come into it. She’d tried to explain and had ended up promising to invent a new game. She still had that to do, too.

She grabbed a bottle of sparkling water from the fridge. If she had the night to herself in this massive house, she intended to enjoy it.

She stopped by her bedroom, changed into her skin and a robe and headed out to the deck. She shivered as her bare feet hit the cold wood. But the hot tub beckoned.

Nobody would be back for a while, right?

She tossed her phone on the table next to the hot tub, which sat in the corner of the deck with a pergola over the top to help keep the sun off in the summer and the snow from piling up on the cover in winter. Opening the cover, she pulled off her bathrobe and slipped in fast. Hitting a button, the bubbles flowed.

She closed her eyes on a sigh as she sank lower, leaving only her head and a few inches of her neck out of the water. When she felt her hair floating on the water’s surface around her, she grimaced. She’d forgotten to grab a clip.

Rachel kept hairclips in the basket next to the door, but that would require her getting out of the warmth and walking across the deck naked and freezing. No way! That is so not happening.

Half-smiling, she sank further beneath the water, using her hands to smooth the sides back, uncaring now that it was getting even wetter. She closed her eyes and allowed her body to float and move as it would in the frothing water.

She sighed as the pulsing water began to work the stress from her back and shoulders. She really needed to get her body moving. Maybe a yoga class would help?

She rubbed her hands over her body, letting her fingers trail over her stomach, and playing with the urge to move them lower. Visions of Dustin filled her mind. She wished he was here…now. They could burn out some of their mutual lust.

She let her fingers trail to her thighs, imagining his strong hands on her. She stroked into the folds of her sex—he’d be good at this. She gave a soft moan and brought one hand up to tweak her nipples. She wished she had his mouth on her, kissing, nipping, licking.

Shaking her head, she pulled both hands away and clenched her fists tight. She’d been trying to wipe Dustin’s face, and the desire for him, from her mind every day now. Nothing had worked and she was growing more frustrated each day. And this was only winding her even tighter.

She’d resisted asking Rachel about him. She knew he was still around—she’d hear him sometimes, showering in the mornings, or hear the hum of his car’s engine as he pulled into the drive long after she’d gone to bed. But he was always up before she was and didn’t come home until way too late. Oh, well, it probably was for the best to keep it that way.

Pushing herself up in the water, she opened her eyes, looking around for her water. She saw a figure move and gasped. Then Dustin stepped into the light from the house, and Jasmine’s pulse shot up to the sky.

Download Dustin and Jasmine’s story from Amazon now and start reading it in seconds: