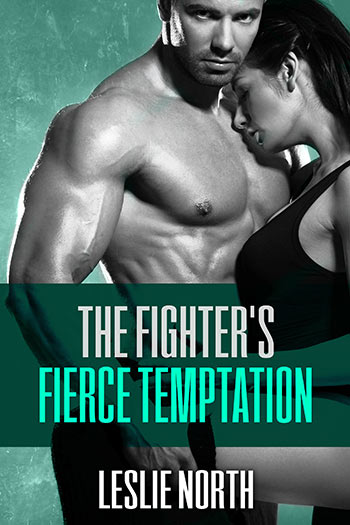 They’re arrogant, broody, and have an ego to match their hulking muscles. Not to mention her scumbag ex was one of them..

But when her dad, a legendary MMA trainer, suffers a stroke and the medical bills start piling up, she’s forced to start training one of the infamous Burton Brothers. All she needs to do is pretend to be her dad for a few days. But from the moment Bryant Burton shows up at the gym, all bets are off. With his taut muscles, steely gray eyes, and simmering strength, fighting his pull is going to be the biggest challenge of all.

Bryant can’t understand his cravings. If the desire he’s feeling for “Coach Anders” wasn’t disturbing enough, the man’s daughter is starting to make him forget why he came. Her creamy skin, petite body, and full lips are driving him insane with need. And the fact she keeps disappearing doesn’t help either. If he’s going to be ready for his championship fight, he’ll have to do something to satisfy his urges and get his head back in the ring.

One kiss is all it takes to ignite their chemistry, but with Alice’s deception and Bryant’s short fuse, things are bound to go up in flames…
Approximate length: 30,000 words (a novella)

You can get book 1 today and start reading within minutes:

Alice sat very still in her father’s office chair. She made the mistake of glancing up and had to stifle the gasp that threatened to burst forth at her first glimpse of Bryant’s eyes. They were blue, almost grey, intense, and fringed by the darkest lashes she’d ever seen on a man.
He was absolutely gorgeous, and she considered herself a good judge. She was only twenty-two—the same age as the man sitting across from her—but she’d been around MMA fighters her entire life. Normally, the sight of a mostly naked man, complete with muscles and sweat running between those same muscles, didn’t even cause the tiniest spark.
It was different with the man sitting across from her now.
The woodsy fragrance he wore had already captured her senses. But his eyes. He had eyes like the sky just after a storm. Eyes that held fire and heat and a magnetism that had to be due to his personality—to the drive that had made him an MMA fighter. He had the body of a fighter, too—lean, strong mass, long arms and legs that would give him reach, wide shoulders for strength. A great package overall. But those gorgeous eyes caught her and trapped her, and left her heart racing and sent a deep warmth through her center.
God, I need to get away from him before I give myself away! Or before I do something stupid.
She was not falling for a fighter again. Not ever. Scott had cured her of that forever. But her mind instantly flashed back to Bryant. She could see glimpses a smooth bare chest peeking out from his shirt, muscled torso and thighs, strong arms that could pummel his opponent into submission. The way his tight fighting shorts outlined his…
She cut off the thought. Alice felt sweat running between her breasts and cursed the need for a tight sports bra. Down girl. You are so not falling for a fighter again.
Making a shooing motion with her hand, she held herself still until Bryant finally took the hint and left the office. “Shut the door on your way out,” she barked in a gruff voice.
Once alone, she heaved a sigh of relief and relaxed her posture. She could still smell his scent in the room and found herself wondering if he smelled that divine after a hard workout. You’ll have a chance to find that out soon enough—and so what if he smells great! Great smell does not mean great person.
Pushing the hat back on her head, she resisted the urge to pull it completely off. She’d put her hair up in a twist to conceal it beneath the cap, and she could feel rivulets of sweat pouring down her scalp and the back of her neck. God I hate feeling this way! But it was my idea. I have to remember that when I start wanting to complain!
Shutting off the voices in her head, she pushed away from the desk and headed for her room. She’d taken the opportunity to stop by and check on her father earlier, and he’d been sleeping peacefully. The doctors were insistent that he get enough rest and in addition to numerous other pills. They’d prescribed him an anti-anxiety medication that also acted as a sleeping pill on his system. He would more than likely sleep for the next twelve hours. She was going to have to work hard to make sure Bryant only saw her dad from a distance, and only every now and then.
She climbed the stairs to the second story and entered her bedroom. Picking up the dinner tray Marguerite had left for her, she carried it to the small sitting area located on her private deck. The logistics of pulling off this elaborate ruse with one fighter was hard, but not impossible.
Now if she could just get Bryant off her mind..

You can get book  today and start reading within minutes: