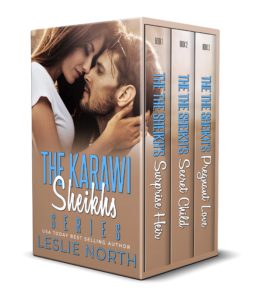 Be whisked away to foreign lands in this new boxset by Leslie North! The Karawi Sheikhs is now available on Amazon, GooglePlay, iBooks, Kobo and Nook.

Book One: The Sheikh’s Surprise Heir

Every time Natalie looks at her daughter, Iris, she can’t help but think about the passionate night she spent with a prince—and for good reason: Prince Iman Karawi is Iris’s father. Though Natalie longed to tell Iman about their daughter, unknown to her, Iman’s manipulative uncle hid the truth. Even as she goes on with her life, caring for her daughter and her dying mother, she cannot get thoughts of Iman out of her mind. Now, years later, a chance meeting brings back all the feelings Natalie’s tried to forget. It’s clear Iman wants to continue where they left off, and it’s just as clear to Natalie that he might break her heart again. Especially if he ever finds out that little Iris is his.

For Iman, Natalie was always more than a one-night stand. He never understood why she left so abruptly, and even years later during a chance meeting, he’s still drawn to the blonde beauty in a way he can’t explain. Despite being promised to another by his parents, Iman can’t suppress his excitement—or desire—at seeing her again. But this time, Iman is not ready to say good-bye. He makes her a job offer she cannot refuse, and as the two spend more time together, it’s clear to Iman he cannot marry his fiancé, not when the love he feels for Natalie burns so deep.

As an ambitious American journalist, Amy Mathewson will stop at nothing to get her story—including going into dangerous, rebel-infested countries. But when she stumbles across seven-year-old Aisha in an orphanage her heart melts, and Amy vows to keep her safe. Until the rebels start to close in.

Just when Amy thinks they’re in grave danger, a stunning Sheikh arrives, claiming Aisha as his daughter; a Sheikh with smoldering dark eyes. Unwilling to let Aisha go with a stranger, Amy agrees to accompany the Sheikh and Aisha to a safe house to confirm his claim. But it mayn’t be safe for Amy, not with a sexy Sheikh making her feel things she hasn’t felt in a long time—and whose touch is as hot as the desert sun.

All his life, Sheikh Bahir Karawi has taken care of himself, knowing no one else would. When he discovers he has a daughter, he immediately sets out to bring her home, to make sure she never feels as alone as he always has. What he doesn’t count on is butting heads with the fiercely protective and dangerously beautiful Amy, who has taken up the duties of caring for his daughter. As they get to know one another, he can’t ignore the realization that Amy would be perfect, both for his daughter and for him.

Danielle Greenski’s life is going to change in a big way. Single and newly pregnant, her days of traveling the globe for work and living a life of adventure are about to end. But not just yet—when she meets a gorgeous man who’s the perfect “last fling” before she settles down to mommyhood. After an amazing weekend with Sheikh Riyad Karawi, she’s totally fine with saying good-bye—until she’s kidnapped by rebels who think she’s carrying the Sheikh’s baby. Apparently, in addition to being a Sheikh, her weekend lover has some big secrets he hasn’t shared. Like how he’s part of the country’s elite military squad. And wanted by rebels.

The last thing this womanizing needs is to fall for a pregnant woman—it would completely blow the playboy persona he’s been using to get close to the rebel forces. But that’s what Sheikh Riyad is faced with after he meets Danielle. He can’t figure out why he feels the need to protect a woman he’s just met, why he can’t seem to get her out of his system.

The Karawi Sheikhs Series is available on: