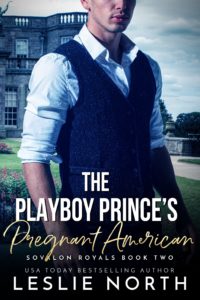 There isn’t much Marcus Ashton, third prince of Sovalon, likes more than a spirited night out, a beautiful woman on his arm (and in his bed), and a fine glass of whiskey. However, when his playboy exploits get to be too much for the royal family, he’s ordered to take a step back from his frivolous lifestyle and work on a serious project. But when he sees American Kyra Rogers, a consultant to the board he’s been forced to join for the women and children’s crisis center, he just can’t resist one last night of fun. While they both agree afterward that their one-night stand was a mistake, Marcus finds himself intrigued by Kyra, who is far different from the type of woman he’s normally attracted to. She’s as smart and serious as she is sexy. So when Kyra finds out she’s pregnant, Marcus wonders if this is a sign that it’s time to grow up and prove he’s worthy of being a father.

Kyra has always regarded herself as a no-nonsense, self-made woman. She’s handled everything life has thrown at her, and she has no problem with the idea of raising her child alone. Though her and Marcus must work closely while they check out a possible site for the crisis center, Kyra is determined to keep their relationship strictly professional. She has no interest in co-parenting and is fully prepared to return to the United States once her job is done. There’s only one problem: as soon as Marcus learns about the baby, he starts trying to prove he’s perfect father and husband material. Kyra knows better—once a player, always a player. Besides, she doesn’t need a man in her life—even if this man is becoming more and more appealing every day. If only he wasn’t so charming. So darned sexy. So determined. If only she could figure out a way to deny what her heart is feeling…

The Playboy Prince’s Pregnant American is available from:

Sovalon Royals is now available as a boxed set on Amazon, GooglePlay, iBooks, Nook and Kobo.