The Prince’s Unwilling Lover (The Royals of Monaco #1) 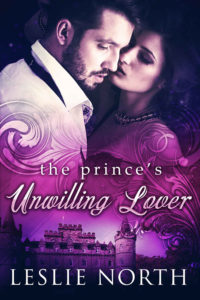 Macee LeBlanc has no interest in becoming royalty—it’s her sisters who are meant for the role. But when she catches the eye of Prince Louis, she quickly finds herself training to become the Crown Princess of Monaco.

Macee doesn’t know the first thing about being a proper lady. She would rather be out playing paintball than enduring lessons in decorum and etiquette—even if the prince is unbelievably handsome. Too bad he spoils his dark good looks and charming smile by being an arrogant snob. But despite loathing everything about her new role, Macee can’t help but feel herself drawn to the stern prince.

Prince Louis has been engaged to Liane LeBlanc for as long as he can remember, but one look at her beautiful, mud-covered sister and he knows he’s found his future queen. Macee’s feisty free spirit is just what he craves after years of stuffy society and strict rules. Now if only he can get the carefree tomboy to see him as more than a royal pain in the behind.

As family secrets and pieces of the past threaten to emerge, Macee and Louis must learn to see eye to eye if they’re going to find their way to a happily ever after.

The Prince’s Unwilling Lover is available on:

The Royals of Monaco series is now available as a boxed set  from Amazon, GooglePlay, iBooks, Kobo and Nook.