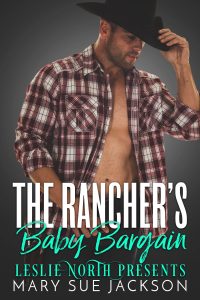 Former class nerd, Lucy Carr, comes home with a tantalizing offer for hometown hottie Aiden Harper: she’s developed a natural pesticide that wants to kill off the spider and eat it, and she’ll give it to him for free … if he agrees to father a child for her. Lucy wants her baby to be smart and good in gym class.

Aiden has put everything he has into his fields of hops, and the award-winning beer he brews with them. But one more year of mites eating half his crop and his family’s farm and legacy as well as his dreams for his brewery are going to go under. When Lucy shows up looking hot, and being hailed for her academic achievements, Aiden is more than a little jealous. Lucy has been working as a cheerleader on the football field. He’d never had the guts to admit his crush in high school after all, jocks and nerds did not mix. Now Lucy has everything, and he’s on the verge of losing it all.

When they realize they might have found more than bugs and babies: they may have found the person who completes their lives.

Pick up your copy of The Rancher’s Baby Bargain from Amazon.

The Rancher’s Baby Bargain is also available as an audiobook.