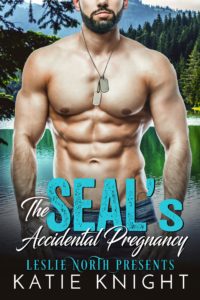 Navy SEAL Demetri Lewis is used to danger. So when he receives mysterious death threats, he just brushes them off. Then Diana, his best friend’s little sister, and the girl Demetri spent an unforgettable night of passion with, is threatened as well. And things get personal fast.

Demetri’s protective instincts kick in, and he rushes to Diana’s house. But when she opens the door, the frantic SEAL gets another jolt of shocking news. Diana is pregnant… with his baby. Now, keeping Diana and their unborn child safe is the most important mission in Demitri’s life…

All Diana ever really wanted was a healthy family and a happy home—white picket fence and all. Hopping from hotel to hotel, trying to lose the madman stalking her, is terrifying, but she’s grateful to have Demetri by her side. He’s kind, strong, sexy, and his kisses take her breath away.

But as danger surrounds them both, Diana is stunned when Demetri makes a decision that threatens to tear them apart. She knows she can trust Demetri with her life.

But can she trust him with her heart?

The SEAL’s Accidental Pregnancy is available on: