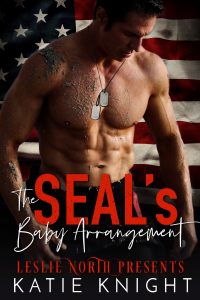 When Maria Blanchard asked Navy Seal Trevor Daniels to father a child with her, no strings attached, Trevor had no idea just how explosive his chemistry would be with the fiery woman who had been a wallflower during their high school years. He vowed never to contact her again after the positive pregnancy test. A year later, when one of Trevor’s dark ops missions ends with the death of his captain and suspicions aimed at him, Maria’s the only investigator he knows who can help him crack the case.

Maria Blanchard had been raised to be a proper Southern Belle, an archetype so wrong for her she’d retreated into books during her high school years. When the police academy finally gave her the guts to be the strong woman she’d always desired, she realized she didn’t need anyone to achieve her dreams. Not to get her dream job, and certainly not to get her dream baby. Still, when her childhood crush agreed to father her baby, she hadn’t expected her heart to open along with her legs.

When Trevor shows up on Maria’s doorstep in need of her help, he calls in his favor. However, being wanted for a military crime means that Maria won’t just be helping Trevor, she’ll be harboring a fugitive, and the father of her child. Unable to say no, when her pride and her heart are screaming yes, Maria agrees to help Trevor one final time before they break ties.

But as their bond grows stronger and love ignites, it becomes a rush to save Trevor’s life before they lose out on a future they could only dream of.

Available as an audiobook.