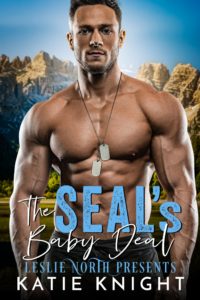 Navy SEAL playing Baby Daddy for his best friend? What could go wrong…

Navy SEAL David Hettinger has never wanted kids. But when his lifelong best friend, Eleanor Thornton, shows up looking gorgeous as ever and asking for a huge favor…he’ll have to rethink his stringent stance on playing Baby Daddy.

Wildlife photographer Ele knows she wants a baby—romantic partner not included. And who better to go all in on no-strings-attached baby-making than with her SEAL BFF? Besides, she’s always wondered what it would feel like to be wrapped up in David’s muscled, rock-solid alpha male arms…

When their toe-curling efforts quickly lead to a positive pregnancy test, both David and Ele are secretly disappointed their contracted time is cut short—especially after David is deployed, leaving Ele to give birth to their daughter on her own.

Reunited while David’s on assignment in the African rainforest, their passion is reignited. But when the area is gripped by a dangerous insurgency, all of David’s fears about getting too close come rushing back to the surface.

How can he possibly hope for a future with Ele when he can’t even guarantee they’ll survive?

The SEAL’s Baby Deal is available on: