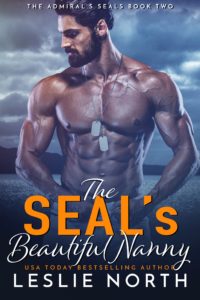 Former Navy SEAL Colin Vale is looking for a good woman, someone responsible enough to be a mother to his adopted daughter, Sofia. And there’s one thing he’s sure of… That woman is not Lily Rhodes. Lily, Sofia’s new nanny, is a free spirit, whose only priority seems to be chasing her dreams. But despite Lily’s flighty nature, Colin can’t can’t seem to get her out of his mind.

The last thing Lily wants is to settle down before she has a chance to explore, to live. But that doesn’t mean she isn’t wildly attracted to Colin. He’s the hottest guy she’s ever met, but this nanny gig is only temporary. The problem is, the longer she stays, the less she wants to leave. And that scares the daylights out of her.

When Lily is offered an opportunity that would bring her time with Colin and Sofia to an end, she’s forced to make decision that could change all their lives. How can she choose between love and dreams, when now they’re one and the same…

Pick up The SEAL’s Beautiful Nanny from: