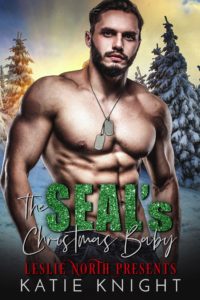 Lila never expected to have a whirlwind romance with a Navy SEAL, and she certainly didn’t plan on falling in love. Something else she didn’t expect? Finding out she was pregnant not long after Preston Lawson deployed. Worse yet, when she tries to tell him he’s about to be a daddy, she’s informed that Preston was killed in action, leaving her alone and desperate. But after years of struggling to get by, she’s finally created a stable life for her and her son and plans to celebrate Christmas in a big way: by heading to the very lodge where she met Preston. The lodge is decorated perfectly for the Christmas spirit, and Lila is content—if not a little lonely. Until Preston, the I’m-supposed-to-be-dead Navy SEAL shows up out of the blue.

Preston never thought about settling down. His unit was his family. His life was the Navy. So three years ago, when a clerical mistake left him officially dead and he was offered the opportunity to use his new anonymity to participate in Black Op missions, he accepted. But when he’s given leave right before Christmas, he gives into nostalgia and heads to the lodge where he and Lila—the woman he’d fallen in love with—first met. He was hoping for some Christmas spirit, but he never expected to find Lila. Or learn that he has a son. Preston knows in that instant his life will be inalterably changed—for the better. But while he and Lila grow closer, it soon becomes clear that someone is trying to harm her, and Preston will do everything in his power to keep her safe. In the end, Preston will have to decide whether protecting Lila and their son safe means staying with them or leaving them behind.