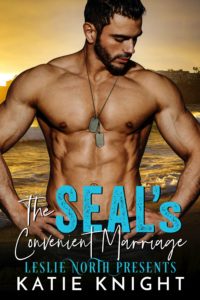 Nothing is more dangerous than falling in love.

There’s only one relationship Navy SEAL Nate Shaw is wedded to: his job. For Nate, love is nothing but a losing game; he’ll never forget the look on his mother’s face when his father left. Now Nate remains unconvinced that marital bliss would ever play a part in his life.

For Emily Edwards, love is everything. But she gave up her dream of a fairytale ending when she adopted Nate’s baby brother. Nothing is more important to Emily than her brave cancer-stricken son, however Matthew’s lifesaving medical treatment has come at a price.

When Nate offers to marry Emily so that she can access healthcare and free housing to help look after Matthew, she hardly leaps at the chance: a marriage of convenience goes against everything she has ever wanted. As for Nate, he’s used to businesslike unions, he wants to support both Emily and Matthew – and it will just be for one year, they decide.

But their arranged marriage is soon put to the test when Emily receives threats from Matthew’s doctor; and as the dangerous warnings escalate, so do Nate’s feelings for her. Forget playing husband, Nate’s duty is to protect Emily – and fast. But can he protect his heart from falling in love in the process?

The SEAL’s Convenient Marriage is available on: