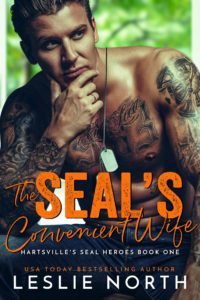 When Navy SEAL Patrick Nelson returns from a black-ops mission, he’s in for a shock—his six-year-old daughter Ellery has been abandoned by his ex and is currently in foster care. Now he has to prove he can be a good, stable father to Ellery, and that includes convincing Imogen Mendel, his daughter’s gorgeous kindergarten teacher, that he’s one of the good guys. Turns out, Imogen is more than just a pretty face. She’s planning to testify against some dangerous people who are now threatening to silence her—for good. But not on Patrick’s watch. He’s got the perfect solution to keep Imogen safe and give Ellery a stable home: get engaged.

Imogen may have agreed to a fake relationship with Patrick, but she has to admit there’s absolutely nothing fake about their attraction to one another. It’s red hot and impossible to ignore. Before she knows it, they’re turning into a real family and her heart is taking a painful turn toward falling in love. Things would be pretty good if not for the threats that escalate as the date of the trial looms closer. Thank goodness she has a sexy SEAL protecting her. But for how long? This fake marriage is turning far too real for both of them…

The SEAL’s Convenient Wife is available from:

Hartsville’s SEAL Heroes is available as a boxed set from Amazon, GooglePlay, iBooks, Nook and Kobo.