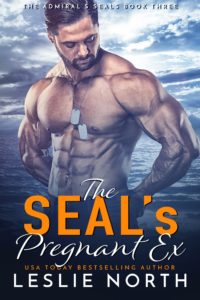 Love brought them together, but will the past tear them apart?

When one of his brothers in arms is revealed to be a traitor, Navy SEAL Alex Vale just wants some time alone, to put the past behind him. But when he gets home, he’s shocked to find his ex-girlfriend, Soledad Hayes, is in his house. And he’s even more surprised to discover she’s about to give birth to his child…

Alex vows to be there for his son, Luke. But soon after Soledad and their baby return from the hospital, Alex learns that his corrupt former teammate is out for revenge. And he knows the safest place for Soledad and Luke is as far from him as possible. But will she ever forgive him for pushing her away?

Soledad grew up convinced that Hayes women were cursed when it came to men. Falling for Alex was a big mistake. Even worse, Soledad can’t stop thinking about the three of them living together, as a real family. Alex might make her blood run hot. But she’s convinced he’ll also break her heart when he leaves.

Can Alex give love a chance, and protect his new family… without tearing them apart?

The SEAL’s Pregnant Ex is available on: