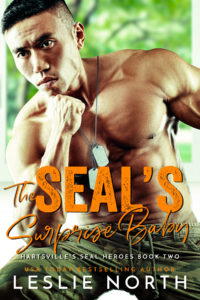 Navy SEAL Anderson Park and agency operative Violet DiPaula didn’t like each other, but that didn’t diminish the spark between them. On a mission together in Russia, they gave in to the red-hot chemistry between them. Anderson is always prepared, but nothing could have prepared him for returning from a mission more than a year later and learning that their one night of passion left Violet pregnant. Anderson’s good at most things, but he knows he’ll be a lousy father. Now Violet and his five-month-old son are in danger, and he can’t abandon them. As much as Anderson knows he’s not cut out for family life, he can’t avoid his protective instincts toward Violet and Nate. Before he knows it, he also can’t keep his heart from feeling things he’s never felt before…

If it were just Violet on the run, she’d be fine. But she has Nate, and that changes everything. Violet has always taken care of herself, and it’s no easy task allowing Anderson to help her and their son. She doesn’t need a man, but the safe house is her undoing. It just all seems so cozy, and having a sexy SEAL around morning, noon, and night isn’t the worst thing that’s ever happened. No matter how many times Violet reminds herself she doesn’t need a thing from Anderson, as the danger increases and they must rely on each other more and more, she finds herself falling hard. If they survive the Russian mob, can their love survive as well?

The SEAL’s Surprise Baby is available from:

Hartsville’s SEAL Heroes is available as a boxed set from Amazon, GooglePlay, iBooks, Nook and Kobo.