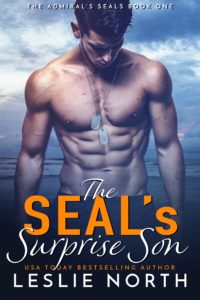 Fate gave them a second chance at love…

Carolyn Evert couldn’t take the sleepless nights that came with having a Navy SEAL fiancé, so she broke it off…then she discovered she was pregnant. After radio silence greeted her attempts to tell her ex-fiance Zach, Carolyn moved on with her life. But when she finds herself in a hostage situation at her jewelry store, she’s shocked to see Zach arrive as part of a security response team.

The smoldering hot SEAL makes it clear he had no idea about the pregnancy, and Carolyn eventually agrees to let him into their son’s life. But after all they’ve been through, she’s still hesitant to let Zach back into her own heart.

Zach Vale won’t let anything keep him from being the best dad he can be. He’ll do whatever it takes to protect Carolyn and their son, and he soon discovers that the hostage situation wasn’t an isolated incident. As they try to solve the mystery of who’s behind the vicious attacks, Zach works to make himself part of their lives.

Can Carolyn and Zach listen to their hearts, and build a family together? Before it’s too late…

The SEAL’s Surprise Son is available on: