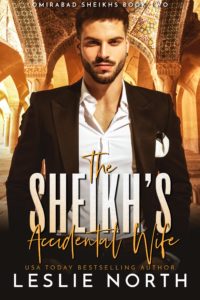 What happens in Vegas…apparently can follow you forever. At least that’s Clementine Llewellyn’s experience who, after a night of drinking and partying, ends up married to a sheikh, of all people. A night of passionate romance? Sure. Marriage? Not so much. Clementine wants an immediate divorce, but Samir bin Salam’s tiny country’s divorce laws require them to stay married. For three months. Samir may be the hottest guy she’s ever seen—never mind spent time under the sheets with—but still. He’s a sheikh and she’s a nobody. But as the two of them spend more time together it doesn’t take long before Clem’s feelings for Samir go from lust to love. However, she’s sure Samir doesn’t feel the same. Best to cut her losses when she can.

Samir isn’t looking for a wife, but when he wakes up with one, he’s willing to do what’s needed until the two can go their separate ways. He may not have a single thing in common with his quirky, flighty, sexy new wife, but all that is quickly forgotten when they’re in bed. That side of their marriage is perfection. In fact, most of the time he spends with her—the talks, the laughter, the way she completely embraces his people—is bliss. Even so, it’s shocking when he realizes he’s in love with her, a revelation that Samir may have made too late. Because by the time he knows he can’t live without her, she’s already gone…

The odds may be against them, but all bets are off when Clem and Samir take a gamble on love.

Omirabad Sheikhs is now available as a boxed set from Amazon, GooglePlay, iBooks, Kobo and Nook.