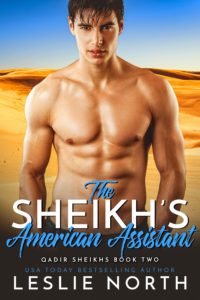 Makayla Riggs is convinced her father was wrongfully convicted, and she’s going to prove it. Her father died in prison in Qadir, a tiny Arabic country, after being found guilty of stealing a diamond from the royal family. Convinced her father was framed by the al Baians, the powerful family he was working for, Makayla heads to Qadir and finds an unlikely ally in Sheikh Baqir Abdul-Rahman, who has his own suspicions about the al Baians. As the two work together to uncover the truth, Makayla can’t help but find herself falling under the charming sheikh’s spell. How can she not when Baqir is the only one who believes her father was framed?

Baqir is trying to solve several other jewelry thefts and knows he’s treading in dangerous territory to place blame for all the thefts on the al Baians. Yet he finds himself willing to do just about anything to help Makayla. Their long nights investigating the original theft brings them closer, and it isn’t long before the two finally give in to the red-hot chemistry that’s been torturing them since they met. When Makayla is threatened by the al Baians, Baqir is desperate to protect her; a kind of desperation that feels like more than chemistry: he’s fallen deeply in love with the beautiful American. But will Baqir be too late to save Makayla, will she disappear forever from his life?

The Sheikh’s American Assistant is available on: