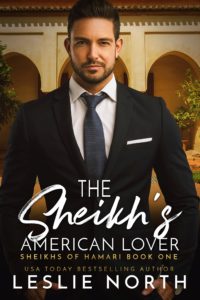 All her life, single mother Hannah Fisher has worked hard, earning everything she’s gotten by herself. However, when her son’s absentee father dies unexpectedly, Sheikh Chakir, a prince and her son Ryan’s cousin, comes to “rescue” them from their decidedly unroyal life. It turns out Ryan is a prince, too, and must complete the Crowning Ceremony as soon as possible in order to fit tradition and meet the approval of the elders. In no time, Hannah is surrounded by opulence, privilege and, worst of all, rules. Lots of rules. Endless rules. Hannah has never been a rule follower, and Chakir is a major alpha male who’s all about them—except the one about not kissing her senseless whenever he gets the chance.

Chakir finds himself turning into a stranger—a stranger he actually likes—the more time he spends with his young cousin’s unconventional mother. Why is Hannah making him forget his strict traditions, the one thing in his life he could count on? He finds himself enjoying the time he spends with Hannah, which makes it all the worse when the elders remind him that his duty is to his tribe, not a sexy American. As he works with Ryan to prepare him for his crowning ceremony, Chakir grows increasingly impatient with Hannah’s nontraditional ways. Her job is to be silent and proper, not opinionated and outrageous.

But it’s only when Hannah pulls away from his cold indifference that Chakir knows he’s made a terrible mistake. Will he have the strength to realize it’s time for him to finally break a few rules himself, or will she be lost to him forever?

The Sheikh’s American Lover is available on: