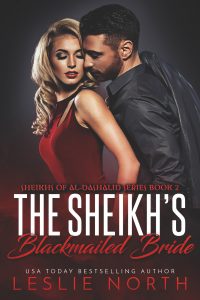 a lavish, beautiful ceremony. At least, that’s what the pictures show.

Turns out Catelyn faked the whole wedding with some photoshopped pictures in a desperate attempt to give her fledgling wedding planning business, Elite Occasions, a chance at survival. The Hail Mary worked, and now they have their first client—with a multimillion-dollar wedding to boot. True, her besties, who are also her business partners, weren’t happy with the elaborate lie, but even they had to admit that it worked like a charm…that is until Sheikh Rami himself shows up, demanding to meet “his wife.”

Sheikh Rami has no time to find a suitable bride, not with his huge contract with a Texas oil company on the rocks. So when news of his “wedding” is uncovered by his brother, Catelyn’s “joke” turns into the answer to Rami’s prayers. Catelyn is good friends with the owner of the oil company—the perfect way to get an in with the company. All he needs is a big rock and an even bigger divorce clause to officially marry by his deadline. The fact that Catelyn is hot as sin only helps matters…

Catelyn, however, does not go gently down the aisle, and Rami is forced to threaten the business she and her friends have worked so hard to build. If she doesn’t marry him, he’ll out their biggest wedding as a lie and she’ll be ruined. But as their business-only relationship turns decidedly passionate, the two become entangled both in the bedroom as well as in business. In the end they’ll have to decide if the marriage that began as fake is actually fate.

Pick up this tantalizing romance from: