The Sheikh’s Christmas Lover (Christmas with the Yared Sheikhs #3) 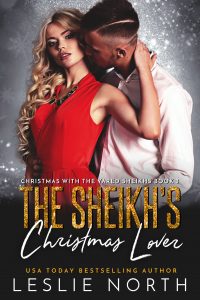 Ah, chaos. What would any holiday be like without it?

For Sondra Wilson-Woods, who craves order but has a knack for handling disorder, pulling off a traditional Maatkare Christmas is the ultimate accomplishment. Hired to make the kingdom’s Advent season a success, despite the absence of their beloved matriarch, Sondra may have taken on more than she can handle—especially when the gorgeous heir to the kingdom, Robel, decides she needs his help.

But despite her best efforts, each of Sondra’s plans go awry, and not even Robel, with his meticulous preparation, seems capable of mapping out an event that will go off without a hitch. If Sondra can just get through this Christmas season successfully, she and her orphaned niece will at least have financial security. And if she can just resist the charms of an infuriating Robel, she can leave Maatkare with her heart intact.

Robel loves order and is more than happy to help out their event planner when a broken ankle leaves him palace-bound. He firmly believes if he plans well enough, nothing can detract from the traditional Maatkare Christmas season that he demands. But as each carefully scripted event goes off the rails, Robel finds himself more and more attracted to Sondra—something that was never part of the plan. It’s best to end things before it’s too late, before saying good-bye is too difficult.

Too bad Robel’s strategy forgot about protecting his heart.

When faced with the worst Christmas morning ever, Robel realizes that it’s the untraditional and unplanned moments that bring the brightest light.