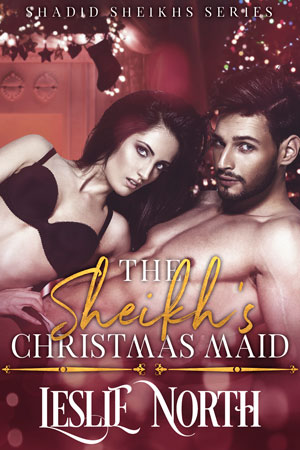 The snow is falling, the fires are blazing, and Poppy Milenne is hard at work. While the housemaid preps for a wealthy guest, she’s hardly expecting someone young and handsome. Imagine her surprise when the man who comes to spend the Christmas holiday is the charismatic Sheikh Shadid. The playboy prince arouses Poppy’s thirst for adventure, but giving in to temptation would mean risking her job…and her heart.

Sheikh Samir Shadid can’t stand spending the holidays alone. Christmas reminds him of a time he’d like to forget, and what better way to do so than with a willing woman. His father may have sent him away for safety, but that doesn’t mean he can’t enjoy himself while he’s here. When the beautiful American maid catches his eye, Samir is determined to seduce her in time for Christmas.

Samir is looking for a holiday fling, but Poppy soon gets under his skin. And the more time she spends with him, the harder he is to resist. While the weather may be cold outside, inside ‘tis the season for love.

Poppy didn’t sleep very well that night. She was used to the cabin being completely quiet at night, but she was all too aware of Samir’s presence. Every time she closed her eyes, she couldn’t help but imagine what he was hiding under his shirt. Washboard abs that she could skim her fingers over, lower, until she could undo the clasp on those pants and tug them down, exposing her to her favorite fantasy.

When the sun finally rose, Poppy felt as if she hadn’t slept at all. Her neck was tense, and her body was heavy. “Oh, it’s going to be a long day,” she muttered.

His royal highness probably slept until noon, but there were things that needed doing, and her stomach rumbled. He hadn’t needed dinner, but with all the excitement happening last night, she had skipped her own dinner and the angry grumbling spurred her on.

Slipping on a pair of jeans and a baggy sweatshirt, she pulled her hair up in a ponytail and glanced at herself in the mirror. There would be no make-up while Samir was sleeping upstairs. She’d seen the lust in his eyes, and it needed dampening. Poppy needed money, and she wasn’t about to lose her job because her boss couldn’t keep his hands off her.

When she opened the door, voices floated from the stairwell. Realizing that Melka and Samir were up, she froze behind the open door and listened.

“Melka, let it go,” Samir said easily. “You told me that there was nothing suspicious in her file.”

“That doesn’t mean that she’s not still dangerous. It’s obvious that she needs money. She could be working for someone else.”

“If she was working for a criminal, she wouldn’t need money,” Samir responded. “Relax. I’m sure this is nothing, and we’ll be able to go back to the palace soon. Until then, consider this a vacation.”

“Vacation? We’re in the middle of nowhere,” Melka grumbled.

For the first time since she’d heard that they’d be having guests, Poppy wondered why Samir was here. When she had taken this job, Emine had handed her a large binder containing the protocols to follow in the event of danger. From her reading, she knew that if something had happened to make the royal guards feel the brothers were in danger, they would have been separated. What if Samir really was in danger? Was she now in danger too? Having never expected to meet any member of the royal family, up until this very moment, she had never considered the ramifications of one of the Shadids being here.

Emerging from her bedroom, she tried to look relaxed as the two men looked up when she entered the living room. With one look at Samir’s gorgeous face, she frowned.

It simply wasn’t fair that a man who looked that good would also be royal and rich.

“Morning,” she said as Samir stared at her. “I was going to make some breakfast. Hungry?”

“I sure am,” Samir said darkly. The underlying message was clear, and a shudder ran down her spine. Could the man not go more than a few days without sex? Is that why he was hitting on her?

“I’ll be watching you cook breakfast.” Melka’s voice was cold as he strode past her and into the kitchen. Did the man think that she’d poison them? With a quick look at Samir, she hurried behind Melka.

The man watched in stony silence as she pulled out the eggs. “I know that you have a job to do,” she told the bodyguard quietly. “Is there something that I can explain to make you feel easier around me?”

“It’s a dream job,” Poppy said with a small smile. “I get to live on the property, and your boss pays well. I’m saving up to go back to school.”

“Why don’t you go back to America to work?”

That was one question Poppy didn’t want to answer. She was aware of Melka watching her as she worked, and she blew out her breath and turned her head. “I like traveling.”

“I don’t know anything about the royal family. I didn’t even know who was coming here last night until you showed up. All I want to do is my job and collect my money. You two being here actually upsets my flow. I’m not all that close to my family, so I’m happy traveling and making money wherever I can. It’s freeing.”

“America is a big place. You wouldn’t need to work near your family.”

“I like it here. And I’d like for the next few days to be as painless as possible. So watch me like a hawk if you like, but I promise that I’m not trying to hurt the royal family. I sure as hell don’t want you here because then I feel like I’m in danger.”

The big man studied her for a minute before relaxing. “I feel like I should apologize, Ms. Milenne. I’m on edge.”

“Please, call me, Poppy, and you don’t have to apologize for doing your job.”

Samir appeared in the kitchen and smiled. “Well, I’m glad that you two have kissed and made up. Poppy, are you going to help me trim the tree today?”

Turning her back, she ignored him and cracked the eggs in the pan. “I doubt it. I have several loads of laundry that I need to do, and I need to bring more wood in. Not to mention that since you sent Taj away, I have to finish shoveling the walkway and driveway unless you want to be stuck here. What time do you want lunch?”

“I’m your boss. I declare that you don’t have to do any of those things.”

“You may be my boss, but Emine checks behind me, and if I don’t do my job, she’ll know. And she scares me way more than you do,” Poppy retorted. “I’m your servant. I’m not your plaything.”

As soon as the words were out of her mouth, she regretted it. Now, if the thought wasn’t already in his head, it would be now.

Unfortunately, Samir didn’t seem put off by her rejection. “All right. I’ll help you with your chores so we can relax and enjoy ourselves this evening. Maybe I’ll even help you trim your tree.”

He was volunteering to do her chores? That sounded like a nightmare. “That’s not necessary,” she said hastily. “I’ll see what I can do about getting everything finished up early. And it’s not my tree.”

“No, I insist. It’ll be my pleasure,” Samir said with an impish smile.

Great. Things were turning out just great. “Sit down,” she grumbled. “Breakfast will be ready soon.”

“What do you normally do for Christmas?” he asked conversationally as he sat down. “What would you be doing if we weren’t here?”

Poppy ignored the question and served the food. Pulling some orange juice from the fridge, she poured three glasses. “I hope you’re not disappointed that we don’t have champagne.”

“I’ll live. You know it’s telling when you ignore a question,” Samir said with a twinkle in his eye. “Breakfast looks amazing.”

“I hope you enjoy it,” she said shortly. “I’ll take my breakfast in my room and leave you alone.”

“Wait, no,” Samir said with his mouth full, but Poppy skirted around his outreached hand and escaped through the living room. Shutting the door behind her, she slipped into her bedroom and breathed a sigh of relief.

Funny. Seductive. Sexy. The combination really wasn’t fair. Digging into her breakfast, she made a plan. If she divided the chores and gave him half, it would keep him busy and he’d leave her alone.

Satisfied with her game plan, she leaned back and enjoyed her breakfast. She’d get through this. She just needed to avoid Samir Shadid.

One thought on “The Sheikh’s Christmas Maid (Shadid Sheikhs #1)”