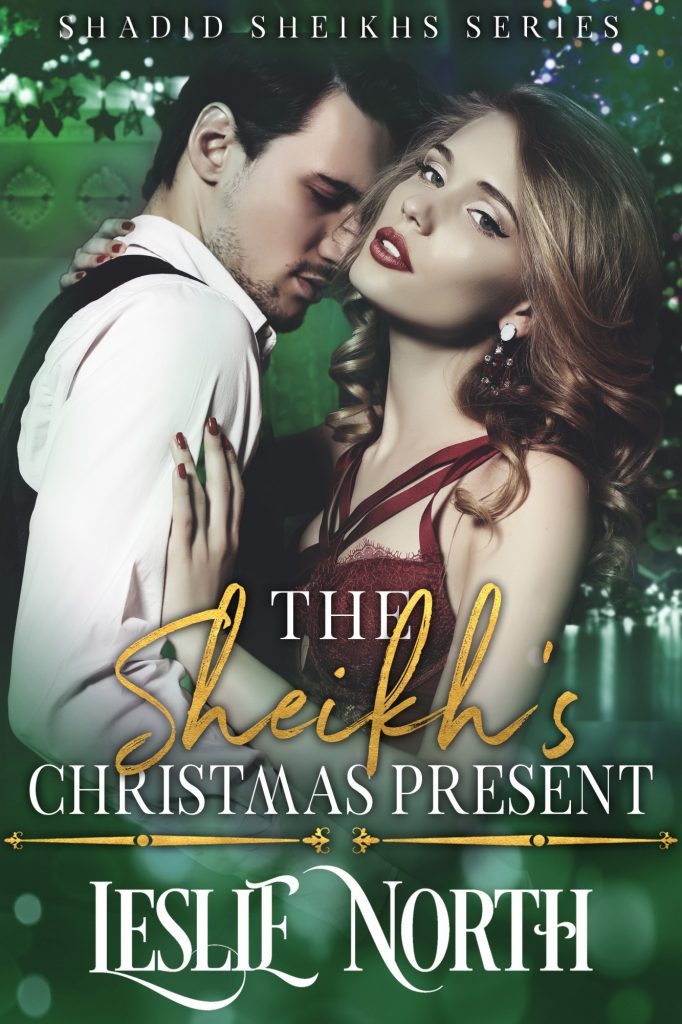 The Christmas season is a time for giving, and pilot Maria Walken has a planeload of gifts she’s gathering for Syrian refugees. Her charity has gotten a bad rap, and this time she’s determined to get her cargo delivered in time for the holiday. When a businessman shows up in need of a lift, she can’t stand his display of wealth…or the way he takes her breath away. But when he offers a large donation to her charity, Maria can hardly refuse.

Sheikh Jarik Shadid is trying to make it to Lebanon to testify against a former friend. With his need for discretion and few options to choose from, he’s more than willing to contribute to Maria’s charity in exchange for a seat on her cargo plane. But as a freak snowstorm blows in extending their travel plans, Jarik’s sensible exterior is starting to crack under the beautiful weight of the principled pilot.

Maria always promised herself she’d never fall for a rich man, but as they work to spread holiday cheer, she’s beginning to wonder if Jarik is everything she’s ever wanted for Christmas.

This book might just be everything you’ve ever wanted for Christmas! Get Jarik and Maria on your e-reader today 🙂

Shivering, Maria Walken wrapped her jacket tighter around her body as she picked up her pace. The sidewalk was crowded as people rushed to their lunch hour. Frustrated, she pushed the long strands of her auburn hair out of her face and checked her watch again. Damn it, she was going to be late.

Rounding the corner, she gasped when she saw the bus idling by the benches. There was still a line of people waiting at the door. Hopeful that she was going to make it, she wrapped her fist around the strap of her bag and ignored the blaring of car horns as she hurriedly crossed the street. She could not miss that bus.

The closer she got, the more relief she felt. She was going to make it. As she neared the bus, she saw the faces pressed up against the glass. The bus was already full. A strange flash of blue caught her gaze, and she turned her head. Someone stared at her from the window, and she caught her breath.

He was absolutely beautiful. She’d never seen such a stunning shade of blue as he stared at her, and there was something sensuous about the smirk that splayed across his face.

Then, before she knew it, the face was disappearing.

Letting out a shriek, she realized that she’d let the stranger slow her pace, and now the bus was pulling out. “No, no, no, no,” she cried out as she ran after it. “Wait!”

There was no way in hell Maria was going to let that bus leave her behind. If she had to, she’d stand in front of the damn thing to get on. Of course, in this city, the bus was likely to run her over. Her lungs burned as she inhaled the chilly air, but she didn’t slow. She chased the bus for a block before, to her surprise, the bus suddenly pulled over and the doors opened.

“Thank you,” she muttered over and over again to the driver as she pulled her shaky legs up the steps. The man scowled at her and looked pointedly to the cash machine. Reaching into her over-sized tote bag, she dug around for her wallet.

After pulling out her scarf, gloves, sunglasses, travel mug, and book, she was mortified to realize that she still couldn’t find her wallet. Redness stained her cheeks as she realized that the driver was glaring at her. “I’m sorry,” she stammered. “I swear it’s in here.” Sitting her bag on the floor, she bent down and started pulling everything out on the floor. If the driver kicked her off the bus, she’d never make it to the airport in time.

If only she hadn’t made that one stop. Maria was almost never late for things, but the teddy bear had stared at her from the window, and she hadn’t been able to walk away from it. Even now, Maria was loathe to set the toy on the dirty bus floor. Tucking it under her arm, she reached back in to her tote back when the doors suddenly snapped shut behind her.

Glancing up, she saw an arm reach around the pole to feed cash into the machine. “Oh, that’s not necessary,” she said with a nervous smile. “I do have my wallet.” Did she? Or did she leave it in the shop?

Not a big deal? Maria felt her chest tighten in anxiety. Straightening, she glared. “Actually, it isn’t fine. I don’t know you, and I can’t accept money from you.”

The man turned around, and her eyes widened in surprise. It was the gorgeous man from the window. All it took was one sweep of her gaze to tell her everything that she needed to know. There was an expensive gold watch on his wrist, and his suit was obviously tailored to fit his muscular frame. There was a glimmer of amusement in his eyes, and her lips curled in distaste. Gorgeous. Rich. He had playboy written all over him.

Unable to trust herself to say anything to him, she nodded curtly and turned to move to the back of the bus. Once she sat down, she could find her money and pay him back. The bus jerked as it started forward, and she immediately stumbled into someone. The stranger pushed her automatically, and she fell back. An arm wrapped around her to steady her, and she turned, she found herself flush against the gorgeous man.

His hard body rubbed up against her curves, and his hands settled on her lower back. “Suddenly this bus ride just got much more enjoyable,” he said huskily.

She lifted her chin to tell him to remove his hand, but as soon as she met his sultry gaze, she knew she’d made a mistake. Lowering her eyes to stare at his chest, she took a deep breath. “If I had more space, I’d be able to find my wallet and pay you back.”

“If you didn’t have such a big bag, you’d probably have a little more space,” he teased.

Was he judging her? Angry, she tried to move away from him, but the jostle only made the crowd move, and she moved even tighter against him. “Easy,” he said with a hint of a laugh. “I think the more you try to get away from me, the worse things are going to get for you. You don’t have to pay me back.”

“Isn’t helping out strangers part of the spirit of Christmas?”

“Yes, for strangers that need help. I do not need your help,” she stressed.

“Right,” he drawled. “And if I hadn’t helped you, we’d either still be back there while you searched the abyss that is your bag, or the driver would have kicked you off.”

“You don’t know that.” Maria cleared her throat. The driver suddenly slammed on the brakes, and she fell forward against him. She felt the outline of his erection pressing into her belly.

“What the hell is that?” she whispered furiously.

A slightly awkward start! Do you think Maria and Jarik will survive a Christmas together? Get them on your e-reader today!