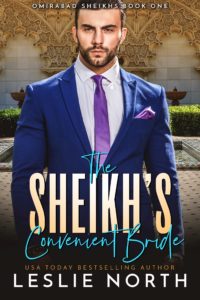 In a desperate attempt to get out from her father’s control, Nora Williams agrees to marry a man she doesn’t love. But she’s shocked when her old friend, Sheikh Rashid, whom she hasn’t seen in years, begs her not to go through with it. Even more surprising? Rashid has a proposal. Literally. Nora should marry him instead. She had a secret crush on Rashid when they were younger, so the offer is awfully enticing. But Rashid is the crown prince of Omirabad—how could she possibly fit in with his royal family? And will she be able to follow her calling for midwifery the way she wants—needs—to? Worse, Rashid’s proposal feels more like a business contract than a marriage proposal. Until they kiss, that is.

Rashid never had any illusion that his marriage would be one of passion. As a member of the royal family, he’s expected to marry before thirty and doesn’t have time to find a woman he actually loves. Until he hears of Nora’s predicament… He’d wanted to be more than friends when they were younger, but they’d never done more than exchange looks across a study table. Unfortunately, even with his proposal, he’s still only a friend to her. Their marriage of convenience, though, lasts about two hours before unraveling into a state of wedded bliss—at least for Rashid. What he doesn’t realize is how much Nora misses her midwifery work, or how very unhappy she’s become trapped in the palace. But the wife of a sheikh has no business working with his country’s poor or being reckless about her safety.

As the two slowly grow closer, they must reconcile Nora’s calling with Rashid’s responsibilities to his country. And discover if this marriage of theirs is real or just a terrible mistake.

Omirabad Sheikhs is now available as a boxed set from Amazon, GooglePlay, iBooks, Kobo and Nook.