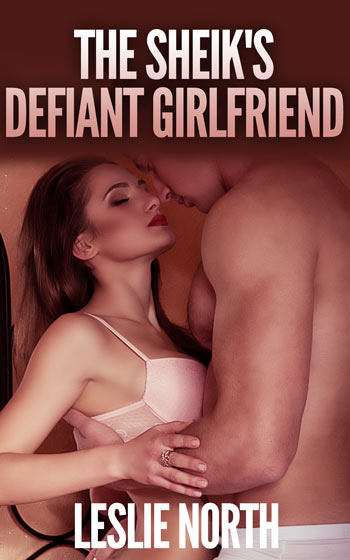 Amir Botros, the younger brother of Sheikh Tariq Botros, could not be more different than his brother. He is a notorious womanizer, but he may finally have met his match.

Soraya can’t believe how the arrogant and obnoxious Amir Botros could be so rude! He was always showing up to her university or the restaurant where she works uninvited. He won’t leave her alone and won’t take no for an answer. So why is she so attracted to a man she knows she should hate?

To Amir, Soraya is fascinating. She is beautiful, elegant and fiercely intelligent – very different from the dozens of other girls he had been with. She constantly pushes him away, rejects him in public and refuses to return his calls. There was absolutely nothing he could do to make her smile. Not once had he been able to make her feel comfortable around him. She never let her guard down around him.

But when he kisses her she melts into his arms.. he couldn’t figure her out. She was his biggest challenge. He knew one thing; he was not going to give up on her.

However, when he discovers Soraya is related to one of his closest friends, he’ll have to decide how far he will go to win her over..

Amir parked his car near the bus stop for his appointment. He waited only a couple minutes before he heard a knock on the passenger window. He turned to see a familiar young woman standing there. He pressed the button to open the window.

“Amir, why are you here?” The woman asked him.

“To pick you up, why else?” Amir grinned.

“I can take the bus, thanks.” She turned to walk off.

“Soraya, come on!” Amir called out after her. She shrugged her shoulders and walked back to the car. She opened the door and got in.

“Last time,” she said and shut the door. Amir did not respond. He simply sat there with a big smile on his face.

“Where shall we go?” Amir asked as he turned the key in the ignition and started the car.

“Home,” she said as if he was stupid for even asking the question.

“We’ve been on one before.”

Soraya rolled her eyes and looked outside the window. That one date they had wasn’t really a date. She went there expecting someone else but instead she found Amir. She was not so keen on the idea of going on dates with her brother’s friend. If Malik found out, he would not be so amused.

Amir turned to look at Soraya. She had on her serious face as usual. Making her laugh was a mission. One that he enjoyed.

“How was work?” Amir asked her. Soraya worked in a restaurant. She had been working there part time whilst studying for her degree in accounting and finance. She did not want to rely on her brother’s money. She preferred to work for herself. She had always been independent.

“Fine,” Soraya replied Amir. “Erm, that is not the way to my house,” Soraya pointed out as Amir took a different turn.

“What?” She was confused with his sudden change of topic. He turned and smiled at her. He was going to take her home but he changed his mind. He wanted to take her out, do something spontaneous. She was always uptight and needed to loosen up a bit.

“What are we doing way out here?” Soraya questioned Amir as they turned onto a dusty road.

“Horseback riding is spectacular at sunset,” Amir replied as he parked outside the ranch. He got out of the car and went to the passenger side to open the door for Soraya. She reluctantly got out of the car. He led her to a building where he greeted a woman and asked her for riding gear. Soraya looked around the place. It was fancy. She had expected a ranch to be dirty and smelly but it was very clean and elegant.

“Miss, if you would come with me, this way,” the woman gestured to Soraya.

“Do I really have to?” Soraya asked Amir.

“Unless you want to ride in your work clothes,” he replied and winked at her. She narrowed her eyes and walked off with the woman. She was asking if she had to ride but as usual, he interpreted things the way he wanted. Growing up, she would see her brother hanging out with Amir and Tariq. She never really spoke to either one of them, only once in a while. Amir used to make fun of how boyish she was. Now he was trying to take her out. It didn’t make sense to her. He could have any woman he wanted.

Soraya quickly changed and headed outside. Amir was already there waiting for her.

“Have you ever been horseback riding?” Amir asked her.

“No, I have not,” Soraya replied in the most calmest way possible. She had never been on a horse and was panicking at the thought of it, she was scared to fall off but she did not want him to know.

“That means you will have to ride with me.”

Oh gosh, falling off the horse is much better than riding with you, Soraya thought to herself.

“I wouldn’t want you falling off and hurting yourself,” Amir said before she could protest. One of the trainers approached them with an Arabian mare. Amir took the reins and mounted the horse. He offered Soraya his hand. She stared at it for a while.

“Come on,” he said to her. She reluctantly gave him her hand. He pulled her up to help her on the horse. She sat behind him. “You will have to hold onto my waist,” he said to her. Soraya frowned. This was not ideal! He had practically kidnapped her, had she the choice; she would have never come with him. Now, they had to share a horse and she had to hold onto him. She slowly wrapped her arms around him. Amir smiled to himself as he felt her body press against him. Oh yes, this was definitely a good idea.