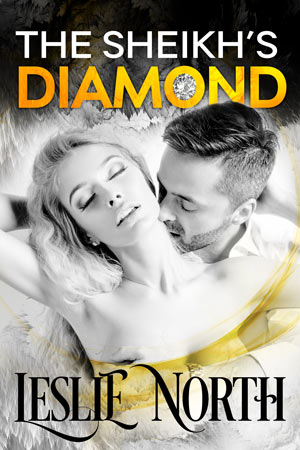 I’m very excited to share with you ‘The Sheikh’s Diamond’, book one in my new series: Sheikh’s Wedding Bet Series. Over the coming weeks, you’ll meet the commanding and simmeringly sexy Khalidizack brothers who take a bet that they won’t get married within the year… But with the feisty, stubborn women they’ll meet, good luck with that!

True love is priceless—or is it?
Sheikh Masoud Khalidizack is terminally bored by palace life. With his elder brother inheriting his father’s responsibilities and his younger brother treating life like one big party, he often feels left behind. When a family friend suggests a bet to see which brother will be left unwed at the end of the year, Masoud thinks it is impossible to lose and he’s already making plans on what to do with the prize – Muharraq Island.
That all changes with the arrival of headstrong Fleur Summers, a beautiful archaeologist bent on
finding the legendary Solomon Diamond. It was once part of the Khalidizack family’s heritage, but now it is lost to history. Her reputation depends on finding it and putting it into a museum, but the distractingly handsome Sheikh who hired her certainly isn’t helping. In fact, Masoud intends to restore the diamond to its rightful place – in the Khalidizack palace.
Now, they have to overcome their mutual mistrust and simmering attraction to find the artifact that could bring glory to them both. In a race against ruthless rivals that spans continents, finding the prize will bring them together or destroy one of their lives.
Get sexy Sheikh Masoud and headstrong Fleur Summer’s intense love story today!

Available as an Audiobook

Exclusive Excerpt From The Sheikh’s Diamond

Available as an Audiobook