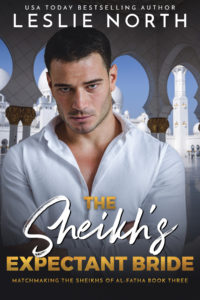 Sheikh Salah Oman is known throughout the kingdom of Al-Fatha as a partying playboy. Now, though, Salah’s ready to leave behind his wild ways and agrees to let his matchmaking sister find him a wife. Why his sister chose his best friend, Rashida Asfour, is a mystery. Other than a one-night stand that left Rashida pregnant, they’ve been firmly in the friend zone and Salah wonders how a marriage between the two will work. Although Rashida knows him better than anyone, he doesn’t quite believe she can love the man behind his playboy mask, the man that Salah has always hidden away from everyone.

When Salah agreed only to help Rashida financially after their one-night stand, she was crushed. But she’s a woman who fights for what she wants—and she wants Salah. Not because he’s the life of the party and not because he’s rich, but because she sees the man beneath the outward confidence. But convincing Salah he’s worthy of her love might be the biggest challenge of her life.

The Sheikh’s Expectant Bride is available from: