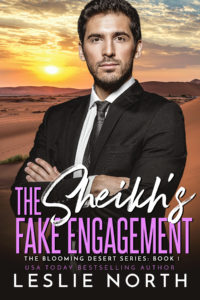 Hamid Al-Qasha has been a stickler for his country’s traditions ever since his father the king died when Hamid was just sixteen. But even he’s thrown when a merchant insists on paying a debt by invoking an ancient law allowing him to use his lovely daughter Talitha as collateral. Such payment is repugnant to Hamid, so while he accepts the bargain to keep tradition alive, he decides instead to treat Tali as an honored guest of his palace for one month. Yet before he knows what’s happening, Tali has charmed everyone in the palace, including Hamid’s young son. When a compromising but innocent picture of Hamid and Tali is secretly taken and made public, Hamid, in an effort to protect Tali’s honor, blurts out all is well—they’re engaged.

They are so not engaged, but what can Tali do except go along with the fake engagement to appease her angry father? Now, thanks to tradition, her stay at the palace must be extended for another month. As much as Tali embraces the modern and pushes the traditional envelope, she’s secretly glad to stay. Hamid may be a bit old-fashioned, but he’s not the tyrant her father is—plus his kisses make her knees weak and his sexy voice makes her insides melt. When they’re in public, he’s the perfect fiancé: caring, loving, attentive. If only it weren’t just a show for the paparazzi. If only she could stop her heart leaping every time she sees him. If only she were smart enough to not fall in love…

The Sheikh’s Fake Engagement is available on: