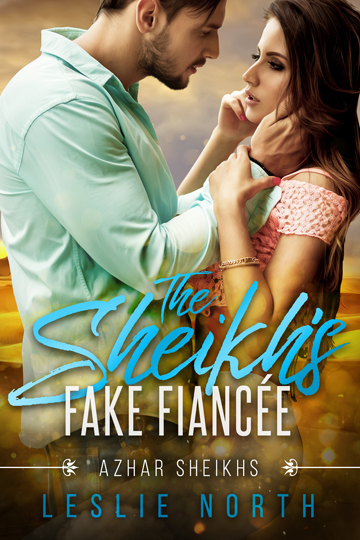 After losing her parents, American artist Elena set out on a trip around the world. Now, in the sultry heat of the Middle East, she’s having a hard time imagining returning to real life back home. But with half of her vacation still ahead of her, she and her friend are packed and ready to move onto their next destination… when a chance encounter changes everything. A dark, handsome stranger with a devilish grin catches Elena’s eye, but how could she know that an innocent favor is about to change her life forever?

Sheikh Asim always relies on his intuition…with business and with women. Along with his brothers, he works hard to keep their company profitable, but he prefers to live in the moment. With pressure mounting from his mother to settle down and marry a family friend, Asim needs an escape. He’s enchanted by the beguiling American beauty he sees at the café, and she couldn’t have come along at a better time. But when he asks her to be his fake fiancée, he never could have known she would change his life forever.

The two waste no time coming together, but when the spontaneity wears off and Elena learns of an unexpected complication, will Asim be ready to face the future?

The first book in the Azhar Sheikhs series, The Sheikh’s Fake Fiancée is out today! It includes, some of my favourites…

a daring female and,

a few things sexier than sin!

“I love this book. I like how you have alpha males but they can never be too over top in control because the women are so strong and sassy and smart”

If you enjoy tantalising playboys, you’ll love this! Go ahead and grab The Sheikh’s Fake Fiancée:

“So, tell me more of this engagement.” Nasir nodded toward Elena, who squeezed Asim’s hand like she wanted to break it off. “I’m dying to know everything.”

Elena smiled wide at him. “Know everything, huh? That might take a while.”

The irony killed him.

“So where did you meet?” Nasir asked.

“Yes,” Asim added. “We just kind of…ran into each other.”

“Where?” Nasir’s steely gaze told Asim he was logging this, as if it would be used in court testimony later. With his mother serving as judge.

“Beirut,” Elena said, at the same time Asim said, “In the States.” Shit. They turned to each other, embarrassed smiles erupting.

“Yes, we originally met in the States,” Elena said. “I thought you meant this last time.” She cleared her throat. “When I came over.”

Nasir nodded, a satisfied smile on his face. Fuck. He knows. He had to end it now, before they botched another question.

“Elena, Aubrey, don’t let us keep you.” Asim gestured toward the hallway visible through the arched doorway. “You must be exhausted, after the long day. If you’d prefer to rest or get ready for bed, by all means. My brother and I will catch up for just a little bit.”

Elena nodded, squeezing his arm. “Yes, I’m feeling so tired. I should go lie down.” She leaned forward, placing a small kiss on his cheek. To Nasir, she said, “It was a pleasure meeting you. I’m sure I’ll see you again soon.”

Aubrey let out a small sigh, eyes lingering on Nasir. “Yeah, bed, I guess. See you, boys.” She stood reluctantly, lagging behind her friend as they exited the dining room. Nasir watched the hallway for a moment before he spoke.

“What the hell are you doing?”

Asim creased his brow, reaching again for his wine. “What do you mean?”

“This is clearly a farce.” Nasir leaned forward, lowering his voice. “I’ve never seen such an obvious lie in my life.”

Asim scoffed. “Please. What does it matter to you?”

“It matters a great deal to me, because you are about to get nailed.” Nasir jabbed his finger into the tabletop for emphasis.

“Nailed. Is that another new American phrase?”

“Listen. Once our mother comes home and sits down to properly talk with Elena, the truth will fly out faster than a flock of geese. You won’t get this past her.”

“There’s nothing to get past her. I’ve made my decision.”

Nasir tutted, leaning back into his chair. “Asim, you’re making a huge mistake.”

“Am I?” Asim turned in his chair, looking for a maid. When he spotted her, he signaled for another round of wine. Then he added, “Just bring the whole bottle.” Turning back to his brother, he said, “The only mistake I can see is marrying a woman I do not know or care about.”

“And you care about this one?”

Does Asim truly care? Find out in The Sheikh’s Fake Fiancée. It’s available at…