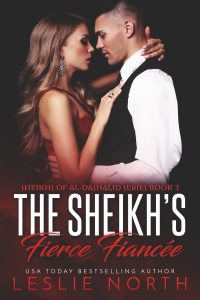 Sheikh Issam doesn’t have time to find a bride. He’d rather a sign would appear to him, signaling the perfect woman and save him the trouble of finding her. However, he didn’t foresee the sign being the sister-in-law of his rival nation’s president crashing into the holiest temple in his country. Now, he and the fearsome beauty must find a way to circumvent the ancient religious law that demands her death—or he’ll face war on three fronts.

Mackenzie came to Al-Dashalid with a mission: save the women’s shelter that had taken root in a disputed fort between Al-Dashalid and her brother-in-law’s country. With war growing more likely every day, she doesn’t have time to waste arguing her way out of an unjust death sentence. She’s ready to sit down with Sheikh Issam and make sure he understands that the safety of the women and children in the shelter is more important than his alpha-male posturing.

What Mackenzie isn’t ready for is Issam offering her the perfect out: marriage. Members of the royal family are exempt from prosecution of holy law. He’ll meet his marriage deadline, and she’ll have his ear about the disputed fort and its vulnerable occupants. It seems perfect.

Now if only she could get him to listen…

This fiery romance is available on: