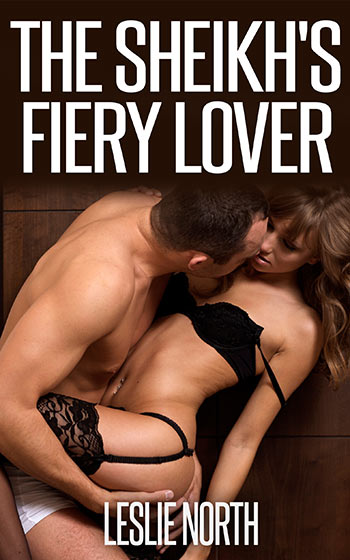 When Rene came to Saudi Arabia to escape her cheating ex-fiancé, she never imagined she’d wind up living in a palace with a Sheikh.

The gorgeous and demanding Sheikh Tazeem is everything she ever dreamed of. But as the real world intrudes on their romance, Rene finds herself alone more and more as Joshua handles a big business deal. She worries that his career obsession will spell disaster for their future, but Rene’s not giving up on love. She’s never played by Joshua’s rules before, and she’s certainly not going to start now.

This business deal represents everything Joshua Tazeem has worked towards his entire life. But with a beautiful distraction back at the palace, he’s finding it impossible to stay focused when his thoughts turn constantly to Rene’s lush curves and challenging personality. He’s spending all his time working when all he wants is to be by her side. But his family’s business has to come first. He’s known that since he was a little boy.

Rene knows it won’t be easy to lure Sheikh Tazeem away from work, but it’s either that or they both face a lifetime of loneliness. With true love on the line, the stakes have never been higher.
Approximate length: 27,000 words (a novella)

“Morning beautiful,” he said to her.

“Hey,” she replied, rubbing her sleepy eyes. He walked over to her and scooped her naked body out of bed. She yelped as he swung her around. “What are you doing?”

“I need a shower, but I do not want to be away from you.”

She blushed as she giggled and covered her face. Joshua walked into the steamy shower with Rene draped in his arms. She exhaled with pleasure as the hot water hit her body.

Pulling her close to him, he kissed her groaning as she responded instantly and wrapped her arms around his neck. Even though the shower was hot, Joshua still felt her nipples harden as they brushed against his chest. Lifting her up, he pressed her back against the wall.

“Because you are two feet tall, I have to pick you up in order to kiss your chest,” he teased as he swiped at her nipples with his tongue.

“I told you before, I am of average height!” Rene replied, as she began to pant.

“If you say so,” he mumbled, as he lathed her nipples. Moaning, she wrapped her legs tightly around him as she scooted farther up on his body. Squeezing his shoulders, she jutted her chest out as his ministrations sent fireworks of pleasure throughout her body. Grasping her waist, he arched her farther back as he continued to lick and suck.

Digging her nails into his back, he could feel her legs begin to shake. Adjusting her position, he sunk into her as her orgasm caused her body to bow and her muscles clenched tightly around his shaft. Groaning, he shifted so the spray from the showerheads crashed against them as he plunged in and out. Speeding up, he continued to glide in and out, as the swell of pleasure overtook him and he came, the spasms from her own orgasm milking him dry.

Dropping her legs, Rene sagged against the wall, as she looked up at him in wonder. Smiling down at her, he reached for the soap and began to wash her clean before seeing to his own needs.

As they sat down to breakfast, Joshua’s secretary rushed in speaking to him frantically in Arabic. Nodding his head, she bowed to him and left the room.

Turning to Rene who was sipping her coffee, “I have to get to the office,” he said to her.

“So soon?” she asked, dropping her chin and frowning.

“But you have not even had your breakfast.”

“I will grab something. There is an important issue with the Russians that demands my attention immediately.”

“But you were at the office working late last night, now you have to go in early?”

Joshua felt a tightness in his chest. “Yes.” He could see the disappointment on Rene’s face but what could he do? The oil industry was incredibly demanding and as the only business with a license to drill for oil in Al-Qalta, making sure that everything was completed with precision and on time meant the difference between feast or famine for everyone who worked for the Tazeems. The constant pressure that existed to serve his family’s interests as well as his position as prince made it impossible for him to wait when the demands of the business called.

“Will you make it in time for dinner at least?” Rene asked, crossing her arms.

“I will try,” Joshua said, trying to keep the doubt out of his voice.