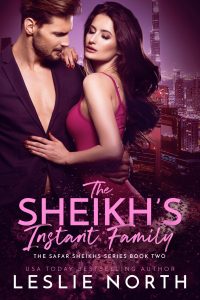 Sheikh Amad has always gone with his gut, which is why his ventures abroad have multiplied his tribe’s wealth and business connections. But with his 30th birthday approaching—and with expectations that he be married by then—he’s got to go home soon…That means leaving his life in Las Vegas, and Vanessa, the sexy waitress he’s falling for, behind.

Vanessa Hammerman has had to work for everything she’s ever had, left by every man from her father on up. Sheikh Amad has been fun, but she’s not thinking of a long-term commitment with a Middle Eastern prince. She’d rather keep it fun…until the pregnancy test comes back positive. Now she’s out on the biggest limb of her life: Will this man run from her, too? Or will he be the one to stay?

It seems like fate when Vanessa tells Amad he’s going to be a father, and his marriage proposal is instantaneous. It’s the perfect solution for fulfilling his duty while at the same time satisfying his heart. But when he brings her home to his tribe, he realizes his independent, Western bride might not work so well in the traditional structure of the Middle East.

Vanessa has put everything on the line for this: her heart, her career, and her life. So when she refuses to fall in line with Amad’s expectations, they begin to doubt if they can make it work. But if they take the chance, love could become the biggest win of their lives.

The Sheikh’s Instant Family is available on: