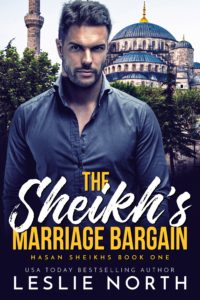 Laila Tindall is only in Raihan to hone her pottery skills and visit her ailing grandfather. Marriage was never in the picture. But when her grandfather is tricked into signing a binding marriage contract to a man she finds repugnant, she has one choice: Run away. Her flight ends with a fortuitous meeting with Zayid Hasan, Crown Prince of Raihan, who offers the perfect solution to Laila’s predicament: marry him and solve both their problems. Zayid’s younger brother must marry his pregnant fiancé, and ancient laws dictate the oldest brother is required to marry first. Desperate for a way to protect both her grandfather and herself, Laila agrees. After all, their marriage will last only until Zayid’s brother can marry—and her marriage to the brooding, handsome prince isn’t much of a sacrifice. It’s not like she’s going to be foolish enough to fall in love…

Zayid doesn’t know what to think about his new half-American wife. He doesn’t really want to think about her at all, but for some reason, he can’t stop himself. Strangely enough, all the royal functions that used to bore him silly are now entertaining with Laila by his side—even though he knows she’d much rather be alone creating her art. Though the marriage of convenience was his idea, he can’t help but start to wish it was the real deal. No way can he ignore the simmering chemistry that’s driving them both a bit crazy. He’s much better at ignoring what’s in his heart—until he realizes it just might break if he can’t convince Laila to stay with him forever…

The Sheikh’s Marriage Bargain is available from:

The Hasan Sheikhs series is also available as a boxed set on Amazon, GooglePlay, iBooks, Nook and Kobo.