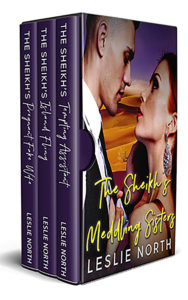 Be swept off your feet in this new boxset by Leslie North!

Join these alpha males as they rise against national threats, escape to an island for love rehab and fall for a pregnant mistaken identity. But the greatest adventure they take, is how they find their happily ever with the women that excite and invigorate them.

Pick up the ENTIRE The Sheikh’s Meddling Sisters series from:

Book One: The Sheikh’s Tempting Assistant

Laura Bliss is an assistant location scout with no sense of direction—which is how she got stuck with a faulty GPS and the job of scouting sand dunes rather than the oasis her boss is currently viewing. With the sun going down and Laura seriously worrying for her life, she stumbles across a tent that looks more like a palace than a campsite. Dehydrated and burnt, it seems like salvation—until men wearing desert garb and toting AK47’s ride out in jeeps to gather her.

Sheikh Raheem can barely believe his luck when an American woman is brought into his tent. He is passionate about his country’s natural splendor, but its PR is in desperate need of a makeover—perhaps as much as the dirty beauty in front of him. He makes an offer: Laura, with her eye for finding the beauty in a location, will help him craft a campaign promoting his country, and when she completes the project he’ll send her back to America with a paycheck she can live on for years. Seeing a chance for financial freedom, Laura jumps at the opportunity.

As Raheem shows off the magnificence of his land, Laura finds herself getting swept into a fairy tale full of palaces, five-star luxury, and the most sensuous sex she’s ever experienced. Though she values her independence, the temptation to stay—not just for Raheem, but for the beautiful country that isn’t getting the attention it deserves—holds her in place. But when the country’s natural treasures are threatened, Raheem and Laura must decide what means more to them: their love for one another or their original plans.

Anastasia knows she’s been wallowing, but what else can she do when her ex-fiancé slips her three-carat diamond ring onto another woman’s finger? Her sister, however, has had enough of the pity party, and shoves a suitcase in Anastasia’s hand instead. She’s signed Anastasia up for “Recover Love Rehab” on one of those man-made islands in the Middle East. It’s the height of luxury and Anastasia’s last chance to kick her ex to the curb. So, try as she might, the sight of the frothy pink sundress and the promise of relaxation does her in. Maybe her sister’s right. And if Anastasia’s going to move on…why not do it in paradise?

Rehaj appreciates the island’s seclusion, but isn’t really looking to Recover Love. Not until he sees the beautiful woman in the villa next door. Despite their chemistry, Rehaj’s knee jerk reaction is to suppress his feelings for Ani. He already has a love: his country, and he doesn’t think there’s room for anything—or anyone—else. Especially not after losing his school sweetheart as a teenager. Yet the couple begins to click as they share activities, share meals, and come to share even more, and their island getaway turns into a passionate escape.

Isabella Germain is stuck between a rock and a hard place. She’d agreed to act as her identical twin sister’s surrogate for an IVF procedure because she needed the money to save their sick mother. No one was ever supposed to know, least of all her sister’s husband—Sheikh Feraz bin Haik al Nazrani.

But when her twin, Roxanne, is killed in a car accident while jet-setting with some playboy in Europe, Isabella must choose whether to stay silent about her true identity, making her pretend marriage to Feraz real in every sense of the word, or risk losing her baby through a swift rejection and the vicious custody battle that’s sure to follow.

When Feraz sees his unborn child on ultrasound for the first time, he’s smitten, even if his relationship with his estranged wife is less than ideal. As Feraz and his wife spend more time together he realizes that she’s a different woman from the person he married—warm, kind, generous to a fault. He’s falling in love all over again, until an earth-shattering realization threatens to destroy it all.

Get this steamy Sheikh boxset from: