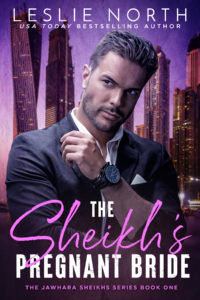 Sometimes love can be a royal pain…

When Sheikh Kamal first sees Erin across the room, he can’t keep his eyes off the stunning beauty. But Erin is unlike any other woman he had ever met. Even for an American, she’s exceptionally feisty, strong, and stubbornly independent.

Erin had no idea that the handsome stranger she met at a party was really the leader of Jawhara, one of the wealthiest countries in the Middle East. To her, he’s simply an irresistibly sexy man. Tall, dark piercing eyes, killer body… He’d be perfect if it wasn’t for his personality. Arrogant, controlling, and dominating barely begins to describe him.

After an intense night of passion, Kamal is called back to his country on an urgent matter, and Erin thinks that’s the end of it. But she couldn’t be more wrong. Because a few weeks later, Erin makes a shocking discovery. She’s pregnant with the heir to a kingdom.

Kamal will do anything to bring her to make her his bride. But the last thing Erin wants is an arrogant prince as a husband.

Can these two put their differences aside, and form the perfect royal family?