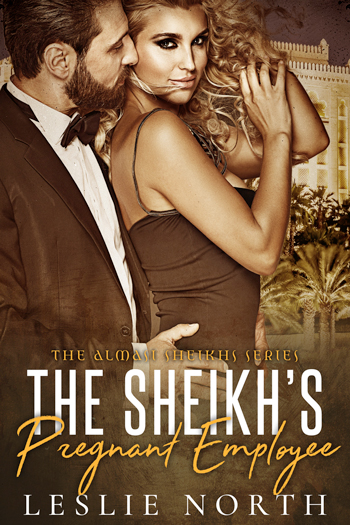 “God, you’re sexy,” she whispered, pressing her head against the door as his kisses skipped hot and juicy over her jawline, down to the crook of her neck, over the exposed cleavage.”

The Sheikh’s Pregnant Employee is all about secrets and undeniable attraction.

The third and last book in my Almasi Sheikhs series is full-on!! Book Three just might be the steamiest in this sinful Sheikh series! 🙂

Layla is a free spirit and Zahir is all about fulling obligations. There are only two things they can agree on – their mutual attraction and hiding any signs of it.

Grab your copy of The Sheikh’s Pregnant Employee at:

All it takes is one night of passion to change your life forever.

Layla’s trip to the Middle East started off with a bang. Amid the sultry heat and exotic luxury of Dubai, she shared a single night of passion in the arms of a sexy stranger. Layla can’t say she regrets it, until she walks into her new HR job and comes face to face with her one-night stand. She never thought she’d see the sinfully handsome sheikh again, but his icy reception makes it clear he wants nothing to do with her. Zahir Almasi is equal parts infuriating and irresistible, but Layla won’t make the mistake of falling for his charms again.

Sheikh Zahir Almasi has been groomed since childhood to be a dutiful son. Now that he’s assumed his role in the family company, it is one he takes very seriously. So when the seductive American he slept with walks into his office, Zahir is stunned. He can’t let Layla distract him from his path—no matter how enticing she is. But the more they work together, the less he can deny their attraction. The Western beauty may not be a suitable woman for him, but Zahir can’t help but wonder if he’ll ever be satisfied with just one night.

As their appetites for each other increase to an undeniable level, Layla discovers a secret that changes everything—a secret she isn’t sure she ever wants to share. Layla is pregnant…and Zahir is the father.

His words melted over her like butter on a hot stove. She pushed to standing, unsteady on her own two feet as she practically floated out of the nightclub, clutching Zahir’s wrist behind her. If this wasn’t the fastest pick-up in all of history… Something about this man just demanded it. It’s okay for things to be about sex sometimes. Especially when the guy you’re inviting back to your all-expenses-paid penthouse suite looks like he commutes to work in a helicopter and Gucci underwear.

She made a note to look at his underwear brand in the penthouse. Pushing out into the warm air of the Minarak evening, Zahir turned to her, his jaw impossibly square. In the comparatively quiet air outside, he looked somehow even more perfect. As if every last hair on his head was individually styled.

“I’ve called my driver. He’ll take us wherever you’d like to go.” His warm hand appeared at her waist, drawing her near. She inhaled sharply, pressing herself against him. Heat rolled off of him in waves, nearly drowning her in his scent.

A few moments later, the car pulled up. Zahir held the door open for her and she slid into the backseat. Remarkably similar to the car that had picked her up from the airport, but maybe that was what all the top-end sedans were like here. Zahir, too, had something familiar about him. A distant impression of Omar, but again—she was probably just seeing similarities between the only two Parsian men she knew.

The car ride was quick, but they descended into making out even quicker. His lips were salty and warm against hers, needy kisses sparking like a forest fire. Heat prickled through her, sending her senses into overdrive. When the car pulled up to the hotel, she could barely detach from Zahir’s face to make it out of the car.

Outside, he smoothed down the front of his suit coat, looking toward the hotel. “Nice place.”

“Yeah, I’m staying here for a while.” She grabbed his hand, leading him inside. She couldn’t have hidden her smile if she were forced at gunpoint. Zahir played it cool, and when she sidled up to him in front of the elevators, he stiffened.

“We should wait until we’re inside your room,” he whispered hotly into her ear. He squeezed her hip, which sent a lightning bolt of pleasure down to her toes. “What I want to do to you shouldn’t be seen by others.”

Her thighs clenched involuntarily. She looked up at him to say something, but her voice had shriveled.

Is Layla making a giant mistake? Find out on your e-reader today! The Sheikh’s Pregnant Employee is available at: