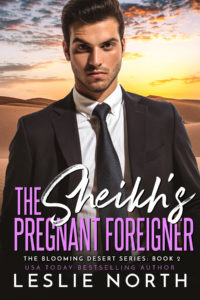 Billionaire Crown Prince Skandar Al-Basran’s life is disrupted in a big way when a red-headed beauty literally stumbles into his life. For the first time, Skandar has been asked by his ailing father to lead a series of rituals to reinforce the royal family’s ties to the kingdom’s tribal community. It is vital to Skandar’s future as king that everything go to plan. So when Virginia “Gina” Allen nearly disrupts a particularly sacred ritual, he asks her to stay. Anyone leaving before the next full moon will destroy the ritual and offend the tribe. Gina is unexpectedly enthusiastic about remaining for a week, leaving Skandar entranced. And intrigued. Especially when her enthusiasm continues after he invites her into his tent…

Gina loves adventure, so spending a week with a sexy sheikh is a no-brainer. Only, weeks later, when Gina realizes she’s pregnant, she knows she’s in trouble. When Skandar unexpectedly returns from the royal palace after his father’s death, she can’t stop herself from blurting out her condition, and Skandar immediately informs her they must marry—but only until a convocation can determine who should be king. His uncle is challenging him for the throne, and not marrying Gina will weaken Skandar’s support among the desert tribes. He’ll make it worth her while, compensate her for her time. Business only. Gina doesn’t need much convincing; she’s happy to help keep peace with the tribes she’s come to deeply respect. But through the whirlwind of events leading up to the convocation, Skandar and Gina’s desire for each other grows stronger. Gina, who’s fallen hard for Skandar, comes to realize she won’t settle for anything but love, and Skandar just can’t seem to understand that love is the one thing he needs most.

The Sheikh’s Pregnant Foreigner is available from: