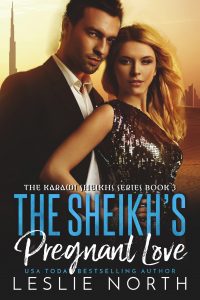 Danielle Greenski’s life is going to change in a big way. Single and newly pregnant, her days of traveling the globe for work and living a life of adventure are about to end. But not just yet—when she meets a gorgeous man who’s the perfect “last fling” before she settles down to mommyhood. After an amazing weekend with Sheikh Riyad Karawi, she’s totally fine with saying good-bye—until she’s kidnapped by rebels who think she’s carrying the Sheikh’s baby. Apparently, in addition to being a Sheikh, her weekend lover has some other big secrets he hasn’t shared. Like how he’s part of the country’s elite military squad. And wanted by rebels. And maybe the most intriguing man she’s ever met…

The last thing this womanizing charmer needs is to fall for a pregnant woman—it would completely blow the playboy persona he’s been using to get close to the rebel forces. But that’s what Sheikh Riyad is faced with after he meets American firebrand, Danielle. He can’t figure out why he feels the need to protect a woman he’s just met, why he can’t seem to get her out of his system—no matter how hard he tries—and why the thought of her going home is punching him in the gut. For now, he’ll just keep her around until he knows she’s safe. Or maybe, until he can convince her to stay.

If only he can make Danielle believe that he’s not just the playboy she met, but a man she could love forever.

Get your copy of The Sheikh’s Pregnant Love from: