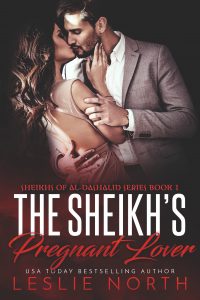 The fierce American, Hannah, gave Sheikh Kyril a week of passion and then disappeared from his life. In the three months since, he hasn’t been able to stop thinking about her. Now, with an ancient law and his family’s expectations breathing down his neck, he has to find her. And convince her to marry him.

Hannah spent ten years raising her younger sister and dreaming about traveling the world. Now that her sister’s grown she’s not waiting any longer. Her first trip, to the Middle East, made her wildest fantasies pale in comparison. Mostly because of Sheikh Kyril, who made her nights burn hotter than any desert day. But when she discovers she’s pregnant—with the sheikh’s baby—she can feel the walls of responsibility closing in around her again. Determined to hang on to her newfound freedom for as long as possible, she decides to embark on one final vacation before she returns to Kyril and breaks the news about the baby.

But when Kyril finds her before she’s ready, she refuses to fall into line. So he falls in with her and begins a courtship through dream destinations and lavish pampering. But Hannah knows she won’t fit into Kyril’s royal family or lifestyle, and when they return to Al-Dashalid, discovering she’s right just might break both their hearts.

Get lost in a steamy desert night with your copy of The Sheikh’s Pregnant Lover on: